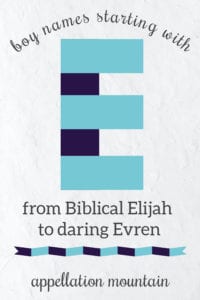 Boy names starting with E make for an intriguing set.

There are the classic Eds – Edward, of course, but also Edwin, Edmund, and Edgar. None of them make the ten most popular E boy names.

But plenty of E names are topping the charts. Parents are looking to the Old Testament for inspiration, and finding a wealth of options.

A number of surname-style names appear on this list, too, from current favorite Everett to possible up-and-comer Everson.

A few long-time favorites are still hanging on here, too. Evan, a cousin to John, peaked a decade ago but remains steadily popular. And the Norse import Eric reached a high in the 1970s, but now feels more like a modern traditional than a trending one.

Read on for more of the best boy names starting with E.

An Old Testament name, the prophet Elijah was known for working miracles. While the name has a long history of use, it’s never been as popular as it is today.

Another Biblical boy, we tend to think of Ethan as more modern. Maybe it’s because of American Revolutionary Ethan Allen, or maybe it’s thanks to so many contemporary characters, like the long-running Mission: Impossible franchise’s Ethan Hunt.

Ezra has a razory, unexpected sound. It also has a great meaning: help.

Another form of Elijah, Elias has enjoyed a long history of use.

A mini name with a big meaning: ascension.

Another Old Testament name, Ezekiel benefits from the ‘z’ as well as

Easton is the first name on this list that doesn’t claim Old Testament roots! It’s modern and polished.

A surname name boosted by the letter v.

A homespun boy name that fits with -tt ending favorites like Bennett and Beckett.

An Ed- name that actually connects to Adam … or possibly Edith.

Classic and regal Edward continues to fall in use, but remains a classic.

Another cousin to powerfully popular Elijah, with a nod to boy names like Julian and Adrian.

Surname name Elliott is also spelled with a single T. Together, it’s more popular than you might guess.

Emilio rose in use along with the career of 80s star Emilio Estevez, and now buoyed by our love of o-ending boy names.

A traditional name associated with Jesus, Emmanuel has never been particularly popular in English. But it fits well with long boy names like Sebastian that parents love now.

An Italian name, Enzo is short for Lorenzo – but it stands nicely on its own now.

A Scandi import meaning “ever mighty,” Eric has gone from trending 1970s favorite to solid staple name for a son.

The dashing Spanish form of Steven.

A surname name given a boost by husband-wife design team Charles and Ray Eames.

Eben means stone in Hebrew; you might know it as part of compound name Ebenezer. It sounds closer to Evan than Ethan.

One of many elaborate – and rare – Old Testament boy names beginning with El.

Ender means rare in Turkish, but it also sounds like a cousin for so many Anders names. Orson Scott Card’s Ender’s Game makes the connection with Andrew direct.

An Old Testament name, Esau is best remembered for conflict with his twin.

It sounds like an Evan-Alexander mash-up, but Evander has roots in the ancient world. It means “good man.”

From the name of Earth’s highest mountain, a name that echoes current favorite Everett.

Surname Everson probably comes from the Old English word eofor – boar. But Everson owes its popularity to the enduring Ever.

An intriguing Turkish name, Evren belongs with Ev- names like Everson and Everett.

What are your favorite boy names beginning with E? 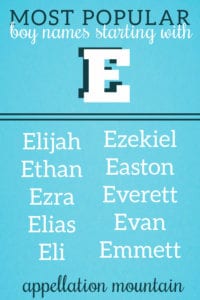 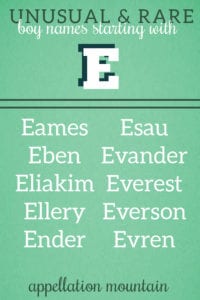