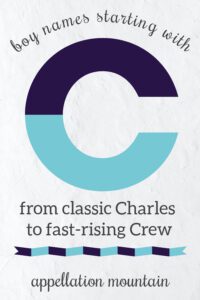 When it comes to boy names starting with C, the list ranges from the most classic of picks to new and original choices.

C tends to read more traditional – even when it comes to trending names. There’s a subtle, but significant, difference between Kayden and Cayden, Kannon and Cannon. That’s broadly true, despite the fact that K is the more traditional spelling in plenty of languages.

And while K names can make a big splash for boys, C remains the fifth most popular first initial for our sons’ names, behind only J, A, L, and M.

As with so many boys’ names, surnames dominate the boy names starting with C. From the most popular C name for boys – Carter – to rarities like Caldwell – the style appeals to plenty of parents.

But it’s not all last-names-first. Bold word names range from Chase to Caliber, and favorite like Cyril can’t possibly be call novel – even if they’re relatively rare today.

Read on for some of the best boy names starting with C!

BOY NAMES STARTING WITH C IN THE US TOP 500

Polished and preppy Carter has eclipsed classic boy favorites to take the top spot for the most popular boy names brought to us by the letter C.

A series and substantial given name, Charles comes with nearly a dozen ready nicknames – including cuddly, upbeat Charlie.

From the 1960s well into the early 2000s, Christopher was the quintessential cute boy name, almost always shortened to Chris. While it’s fading in popularity today, it retains its traditional status.

A Biblical boy name with a strong and distinctive sound, Caleb has ranked in the US Top 100 since 1989, making this a modern staple.

Despite a clearly religious origin and meaning, Christian feels like an every-guy name, accessible and nicely balanced between chart-topping Christopher and trendier, two-syllable n-ending names.

Scottish surname Cameron ushered in an era of longer surname names for boys, but also fits with brief, one-syllable favorites from Jack to Max.

A surname name with a lot of Old West swagger.

A working man’s name with a casual, cool vibe.

An Irish heritage pick, Connor’s big boost came from the immortal warrior at the center of 1986 film Highlander. But American parents have never needed much encouragement to embrace an Irish name.

A substitute for Carter, and a surname name that rose around the same time. Carson, of course, is also a Downton Abbey name.

Strong, solid Cole is either an update to a forgotten English name – think of Old King Cole – or a short form of Nicholas.

From designer denim to a baseball legend, Calvin dots recent decades. Today it feels like a cool, vintage revival pick.

The Spanish take on Charles, every bit as classic and enduring.

A place name with a current vibe, two-parts Cameron and one-part Caden.

The casual take on Charles.

An animal name, Colt is a little bit like Fox or Bear. But it’s also a firearm and a malt liquor, which makes this name lean a little dangerous.

A concise take on so many Aiden names, Caden looks a little more like a traditional surname than Kayden.

As in musical legend Johnny, or cold, hard cash.

Another spelling of Caden, then one more in line with Jayden and other chart-toppers.

It’s a prep school sport and a gang of ruffians – but Crew’s big boost probably comes from design couple Chip and Joanna Gaines.

Originally a Nicholas nickname, polished Colin has long stood on its own.

A name that suggests fortune and fate – hopefully all good.

A spiritual name – Cruz means cross in Spanish – with that edgy ‘z’ ending.

Another spelling of Christian, midway between Christian and Cristiano.

Yet another place name that parents borrowed from the map.

Corbin means raven. It makes a nicely under-the-radar choice for a son.

A fresh alternative to Colton, with a literary vibe thanks to Pulitzer Prize-winning author Colson Whitehead.

Both a surname name and a take on Caden and company.

Speaking of Caden, yet another spelling.

Once a surname for one working as a clerk, Clark is now a little bit Gable, a whole lot Superman.

The single-N spelling of this name remains far more popular in Ireland.

A surname with Irish roots, or perhaps just a longer form of Cal.

An alternative take on Connor.

Double the Ls, and Collin is still a handsome not-quite-traditional choice.

The birth name of Mohammed Ali, and another favorite from the ancient world.

A Biblical boy name with a cool sound – and implications of serious sibling rivalry.

We’re wild about Camila, so why not the masculine form? Both come from ancient Latin name Camillus.

An Old Testament name made famous by an Oprah Winfrey interview.

As a surname, it could refer to a wolf or a servant. In twenty-first century English, it brings to mind either the weapon, or – on a scholarly note – the body of work representing the best in a given area. Though that’s spelled canon.

A spiritual romance language name made famous by Carmelo Anthony.

The name of an inland sea, Caspian became more name-like thanks to author CS Lewis. Today it fits right in with Julian and Adrian.

An angel’s name, Castile was boosted by long-running series Supernatural.

An even more energetic spin on popular Colton.

Germanic first name with a long history of use in the US.

A meaning-rich name with lots of currency thanks to the character from the Rocky movies.

A word name that sounds like it could leap from the dictionary to the baby name book.

Caio most likely comes from the Latin Gaius – rejoice, but reflects a romance language spin.

Like Callahan, a surname name that shortens nicely to Cal.

Like Remington, it might be a firearms reference. But Caliber can also imply something of high quality.

An enduring virtue that sounds quite name-like.

A surname name with multiple possible meanings, Carden seems like a twist on Carson and company.

A word name that implies knights in shining armor.

As in the late, legendary Chadwick Boseman.

An ancient saint’s name, Saint Crispin’s Day was immortalized in a speech given by Henry V in Shakespeare’s play. Don’t recognize it? It’s the source of the phrase “band of brothers.”

Another names worn by several early saints, Cyril has never been common in the English-speaking world, but remains nicely international.

What are your favorite boy names starting with C? What would you add to the list? 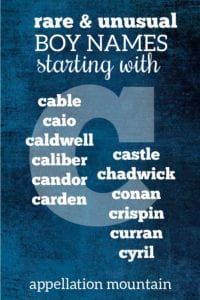 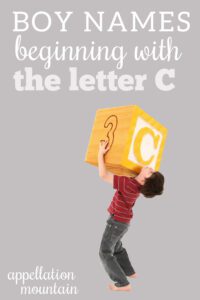