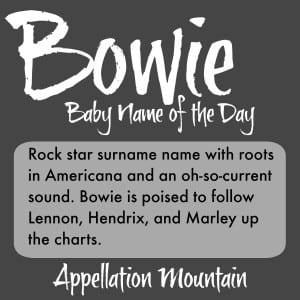 It’s a rock star surname with a current sound.

From one of Appellation Mountain’s most popular Pinterest pins, Bowie is our Baby Name of the Day.

At heart, Bowie is a Scottish and Irish surname meaning fair-haired.

Plenty of notables have worn it – artists, athletes, politicians.

It’s a popular place name, too, thanks to those notables. There’s one just up the street from me, named for former governor of Maryland, Oden Bowie. That Bowie rhymes with Louie and Dewey, though most pronounce the first syllable like Bo and Beau.

James Bowie was born around the turn of the nineteenth century in the South. He rose to notoriety in a duel. Jim was shot and stabbed, but still managed to kill his opponent with a knife.

It’s said that Bowie and his brothers all made various design improvements to a large knife used by hunters to butcher their game – hence, the term Bowie knife.

Jim moved to Texas in 1830 – back when it was part of Mexico, married the vice governor’s daughter and joined the militia. By 1836, he was fighting for Texas’s independence, and was co-commander when General Santa Anna and his troops overtook the Alamo.

Jim, along with the rest of the Texans, died at the Alamo.

And yet, here’s a curious thing: for all the cries of “Remember the Alamo!” it seems like a fading piece of Americana. Gone are the days when every boy wanted a Davy Crockett coonskin cap. Betcha that plenty of you recognize the term Bowie knife, but think of someone entirely different when you hear this name.

When he launched his musical career, Davy Jones of the Monkees was well-established. The other David Jones borrowed his stage name from the knife.

His first UK hit came with Space Oddity in 1969, and he struck it big in the US with Fame in 1975. His sound evolved over the years, and he added acting to his repertoire – while still producing hit after hit, and being inducted into the Rock and Roll Hall of Fame.

He’s also known for courting controversy over his long career, with his ambiguous persona – male, female, alien? As an actor, he’s played a goblin king in Labyrinth and Nikola Tesla in The Prestige. He’s also made cameos as himself in flicks like Zoolander.

In baby name circles, the singer is also known for calling his firstborn Zowie, though Zowie later re-named himself Duncan. David is currently married to gorgeous Somali-born supermodel Iman.  Together they’re the parents of Alexandria Zahra.

Bowie: As a Given Name

Lawyer Bowie Kuhn worked as a lawyer, representing Major League Baseball for much of his career and becoming MLB’s Fifth Commissioner in 1968. Kuhn was a Marylander, and Bowie was a family name.

A handful of children were given the name in the 1970s, 80s, and 90s, possibly due to Mr. Kuhn, maybe as family names, or maybe in homage to the singer.

In 2014, designer Rebecca Minkoff named her daughter Bowie Lou. And Zoe Saldana recently gave the name to one her twin boys.

For now, let’s call Bowie a unisex surname name likely to feel very fashionable in the near future. But will we be hearing this one on girls, boys, or both? That remains to be seen.

What do you think of Bowie? Do you think it could follow surnames like Riley and Bailey into wider use?