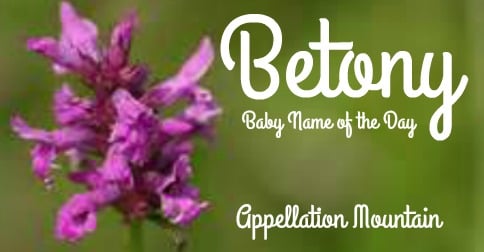 Betony is a rare botanical name that could wear well on a girl today.

A confession: I’m struggling to unravel which plants, precisely, are called betony. That’s probably because it’s part of a big group of flowering plants, which seems to include everything from the Chinese artichoke to bishop’s wort and hedgenettle. Or maybe some of those are names for the same thing.

What I can confidentially report is that the scientific name is stachys, which is a likely a non-starter as a given name.

Betony flowers from July to September, making it a perfect possibility for a summer baby.

The plant has been used for various medicinal purposes for ages.

The name was originally vettonica, named for the Vettones – a tribe living in modern-day Spain. It’s thought they might have Celtic roots.

The Roman military reached their part of the world around 25 BC. A Roman physician named Antonius Musa mentioned the herb not long after.

Pliny made another early reference to the plant in the first century AD.

If all of the references are believed, betony can cure almost any ill. It can keep ghosts from haunting graveyards and ward off bad dreams.

It cures more mundane woes, too – arthritis, gout, and possibly snake bites. Medieval monasteries grew it, and apothecaries stocked it.

An old Italian proverb suggests that you should “Sell you coat and buy betony.” A similar Spanish saying also supports the idea that the herb was seen as a cure-all.

Bettany has starred in critically acclaimed movies, like 2001’s A Beautiful Mind, as well as blockbusters like The Avengers series – he voices Jarvis, the hyper-intelligent system that supports all of Iron Man’s advanced technology and operations.

And here where it gets confusing. It appears that Bettany may be a form of Bethany, as in the village in the Bible. Or, more likely, Bettany is a place name inspired by the plant name – but altered because of the Biblical reference.

Betony: By the Numbers 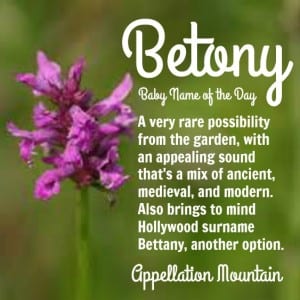 Regardless of origins or meaning, what we can say for certain is this: Betony is rare.

It’s the name of a character in a young adult fantasy series by Elizabeth Kay. Should The Divide and the rest of the trilogy ever become a movie, maybe it would boost the name.

And yet, there are dozens of reasons to think this name could work.

It fits with three-syllable, ends-in-y names for girls, from Kimberly to Emily. It could be a smoosh of Beth and Annie, and it could easily shorten to Betty or Bette. And parents continue to consider ever rarer nature names.

Overall, if you’re after an extremely rare name from the natural world, Betony is one to consider.

What do you think of Betony? Does it work as a child’s name?