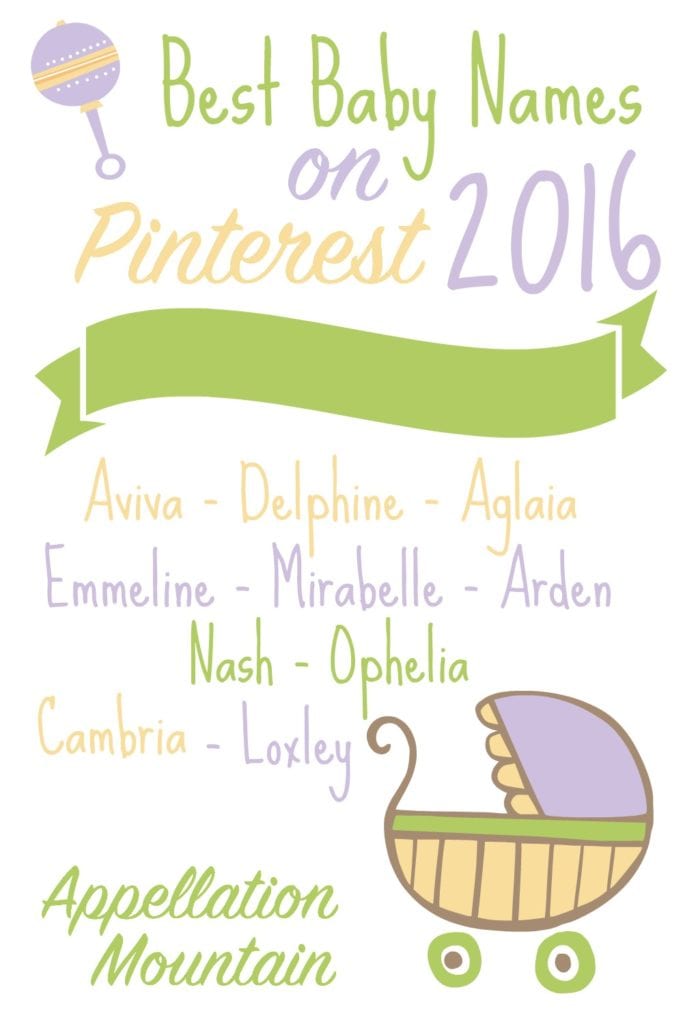 What were the best Pinterest baby names 2016? I looked back at all the names pinned this year, and found a quirky, eclectic Top Ten.

Just how quirky and eclectic?

And yet, looking at the list I can easily imagine many these names making their way much higher in the rankings.

That’s different that the last time I did this exercise. Those names were every bit as offbeat, but as a set, they didn’t seem quite as likely to break into the mainstream.

So let’s look at the best Pinterest baby names 2016!

Aviva – It sounds like an elaboration of Ava, but Aviva comes from a Hebrew name meaning spring. Great sound, gorgeous meaning.

Delphine – As French as Genevieve, as tailored as Harper, Delphine brings to mind the fast-rising Josephine. The name has enjoyed some exposure, thanks to Orphan Black. But so far, Delphine remains under the radar.

Aglaia – Of all the names on the list, Aglaia strikes me as the outlier. It’s only been given to more than five girls once – ever! – in 2006. No mistake, it’s a gorgeous name – but so unknown, that it is only for the bravest of the brave.

Emmeline – With Emma and Emily dominating the girls’ Top Ten over the past decade and more, it feels inevitable that other Em- names would catch on, too. Emerson, Emory, Emelia, and Ember have all risen in recent years. Emmeline actually comes in behind the spellings Emmalyn, Emmalynn, and Emmaline – but this particular spelling has more history than most.

Mirabelle – Lovely Mirabelle fits right in with Isabelle and Annabelle, plus all of those M names – Mia and Mila and Maya, too. Except Mirabelle remains under the radar. Just 99 girls were given the name in 2015 – a new high! But compare that to 3,250 newborn Annabelles and nearly 3,200 newborn Isabelles, and it seems obvious that Mirabelle counts as an undiscovered gem.

Arden – Arden returned to the US Top 1000 in 2015 after many years’ long absence. With ties to Shakespeare’s forest and a tailored, frills-free sound, Arden makes a replacement for Harper. It’s wildly popular on Pinterest, too.

Nash – Nash fits right in with all of those short names for boys, like Jax and Kai. It’s edgy and cool but feels like it must have some history, too. Credit for the name’s use goes to 1990s television series Nash Bridges, but that’s all but forgotten today.

Ophelia – Long dismissed as too tragic for a child, this name finally overcame those hurdles in 2015 to return to the US Top 1000. Ophelia picked up steam thanks to a Lumineers song and its similarity to long-time favorite Olivia. With many other ends in -lia names for girls on the rise, Ophelia definitely deserves a second look.

Cambria – Cambria has teetered on the edge of the US Top 1000 over the past decade, in some years and out others. A mix of appealing sounds, Cambria also appears on the map in California and Pennsylvania – and, of course, it originally served as a Latinised name for Wales.

Loxley – Here’s a surprise! Loxley comes in at the top of the best Pinterest baby names 2016 list. An on-trend sound with that middle ‘x’, Loxley leans masculine thanks to the Robin Hood legend. But that ley ending might push it into the girls’ column for some. It’s been wildly popular on Pinterest since the first. The post was published in late July – and yet, Loxley surges to the top spot for the year!