It’s the name of the lake at the heart of the Disney World resort area.

Disney Baby Names Week starts with Bay as our Baby Name of the Day. There are at least eight possible meanings and origins for this name:

So what makes this a Disney baby name? It’s all thanks to a lake.

Ages before Walt Disney ever dreamed up a single sketch, the lake was there in Florida. It’s said that Walt spotted Bay Lake from the air while scouting possible locations for his new theme park.

The area around the lake became part of the Reedy Creek Improvement District, and the newly created municipality of Lake Buena Vista, in 1967.

The biggest island within the lake had previously been used for hunting. Locals called it Raz Island, then Riles Island, but Disney first operated it as Treasure Island, and then Discovery Island – a wildlife park precursor to Animal Kingdom. Today it’s closed, though Disney fans remain fascinated by the history of the deserted attraction.

While it’s easy to visit Epcot or the Magic Kingdom and not be aware of Bay Lake, if you stay within Disney World, odd

s are that you’ve crossed Bay Lake, or maybe even stayed on its shores.

Bay: By the Numbers

You might think of conservative pundit Bay Buchanan – born Angela. She served as US Treasurer under president Ronald Reagan.

The name has a long history of sparing use. In 2011, there were ten newborn girls named Bay, along with seven boys.

That’s because of Bay Madeline Kennish, a fictional character from ABC Family’s Switched at Birth. The show deb 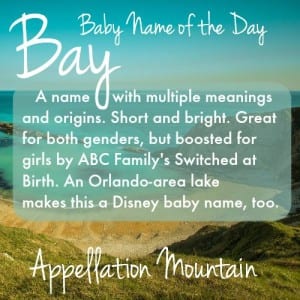 uted in June 2011, and is currently in its fourth season. The story follows two girls who were accidentally switched at birth in the hospital, and their families, as they deal with their discovery.

Switched at Birth has boosted this name for a girl, but Bay works for both genders. It sounds like Jay as well as Kay, and nature names like River and Ocean tend to work well for boys and girls.

If you’re after Disney baby names, Bay is subtle – a nod to Walt Disney World that’s less obvious than Cinderella or Mickey.

What do you think of Bay? Do you like it better for a boy or a girl?