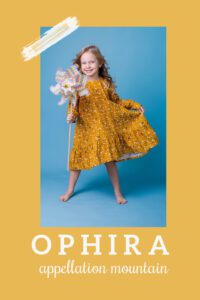 The baby name Ophira is both ancient and rare, a glittering name with an intriguing sound.

Thanks to Liz for suggesting our Baby Name of the Day.

In the Old Testament, Ophir was a port city. And not just any city, but a fabulously wealthy one.

King Solomon received cargo from the city, loaded with gold and silver, plus all sorts of precious goods. Pearls. Peacocks.

The “gold of Ophir” is mentioned elsewhere in the Bible.

Ophir also appears briefly as a masculine given name.

The exact location of the Biblical place is lost to time. Archeologists have theorized that it might be in Africa – Zimbabwe, maybe, or Tunisia or on the coast of the Red Sea.

But others have argued for locations in modern-day India or Sri Lanka, or perhaps the Philippines.

What we do know is that plenty of places were named after Ophir.

The Solomon Islands, off the coast of Papua New Guinea, received their name because they were believed to be part of the Biblical story.

And plenty of mining towns were named Ophir, perhaps in hopes that they, too, would become rich sources of gold. One California boomtown was also known as Ophirville.

One more golden reference: the Israeli equivalent of the Oscars is known as the Ophirs. They were named for legendary Israeli actor, comedian, and director Shaike Ophir.

But that’s Ophir, a place name and sometimes a first.

Add an A, and you’ll arrive at the the baby name Ophira – the obvious feminine form.

Comedian and NPR host Ophira Eisenberg might make the name familiar to some. Twin sisters Tali and Ophira Edut made their names as astrologers, with columns in places like Elle magazine, as well as appearances on shows like The Real Housewives of New Jersey.

It’s not exactly a household name, but it sounds like it could be.

In fact, the baby name Ophira would’ve fit right in circa 1922. Names like Vera, Elvira, and Elmira, were Top 1000 choices. Orpha, Ophelia, and Opal were all familiar, too.

And yet, the baby name Ophira debuted in the US Top 1000 in the year 2020, with just five girls receiving the name.

But it tracks with the name’s profile. Ophir first surfaces in the US boys’ data in 1978, with seven births. Possible alternate spellings, like Ofira and Ophirah, have yet to debut.

While the baby name Ophira, with those Old Testament roots, feels like it could be vintage – and sounds suitably antique – it’s actually a newcomer.

Just like American parents have slowly discovered modern innovations like Elowen, Ophira is just too new to have much history anywhere.

It seems to first appear in Israel. During the late 1970s and early 80s, Ofira Navon was the First Lady of Israel.

It’s taken the name some time to make its way to our shores, but now that the baby name Ophira is slowly gaining in use, perhaps we’ll hear it more.

For now, however, Ophira remains a glittering rarity.

What do you think of the baby name Ophira? 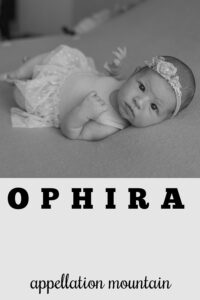