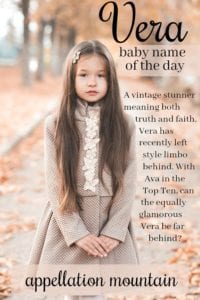 Vera is making a comeback, shaking off the dust to follow Ava up the charts.

Thanks to Jackson for suggesting our Baby Name of the Day.

So often, a name comes into favor, peaks, and then slowly fades. Every name ages. Some end up pegged to a decade; others decline in use, but don’t scream mid-century or 80s name.

We tend to call this the 100-year rule. Names cycle from newborn to child to young adult; to mom, grandma, and eventually great-grandma status before coming around to newborn once more.

That’s true for Vera. The name peaked around the turn of the twentieth century, appearing in the US Top 100 from the 1890s through the 1920s. As if on cue, the name feels fresh again.

Another reason modern parents might love this name? It’s meaning-rich.

It comes from the Russian word for faith, but resembles the Latin verus – truth. That makes for a powerful pair of meanings.

Another bonus? Slavic and Latin roots mean the name travels well. It’s heard across Europe, ranking in the Top 100 from Sweden to the Czech Republic. It’s a place name, too, from Argentina to Oklahoma.

We’re often told that Vera developed fairly recently, but the Dictionary of Medieval Names from European Sources lists the name way back in the ninth century.

By the 1970s, Vera had tumbled to the bottom of the charts. After 1983, it left the US Top 1000 entirely. In that era, smash hit sitcom Alice featured a diner waitress by the name, a shy and none-too-bright foil for sassy Flo and street-smart Alice. Veteran actor Beth Howland played the part.

It was tough to imagine any of those names on a child in the era. Girls were called Alicia and Alyssa, Vanessa and Valerie, but not Alice or Florence or Vera.

But after many years of absence, the name returned to the rankings in 2009.

It coincided with the rise of Vera Farmiga, the daughter of Ukrainian immigrants. Farmiga gained notice in the early 2000s; by 2010, she’d earned an Academy Award nomination for Best Supporting Actress for 2009’s Up in the Air, opposite George Clooney.

Her fame seems to have put the name back on parents’ radar at exactly the right moment.

Vera: So Many Famous Figures …

Of course, wedding dress designer Vera Wang has long lent the name a certain glamour. Remember this scene from Sex and the City? It feels like the name’s rise came shortly after Wang became a household name.

It’s the birth name of both Jayne Mansfield and Mindy Kaling, but then, neither woman used it professionally.

If Farmiga gets some credit, and maybe the wedding dresses do, too, I think this name mostly succeeds for other reasons.

And I do think the positive, appealing meanings persuade some families.

But it also comes down to sound.

Our current Top Ten includes Ava, Olivia, and Evelyn. A few places behind, there’s Avery, Victoria, and Savannah. We love a girls’ name powered by the letter V.

Plus it’s short and complete, like Emma or Nora.

Overall, that makes this name a perfect choice for parents after something just slightly different: vintage, but with a modern vibe. Elegant, but still easily wearable for a child. A few years ago, I called Vera quirky, but today I think it’s just downright stylish.

Do you think this name is ready for revival? Would you consider it for a daughter?

Originally published on April 14, 2010, this post was revised substantially and re-posted on October 8, 2018.