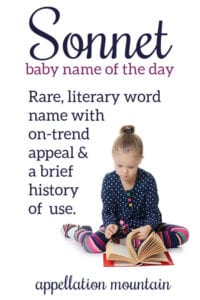 Thanks to Kaela for suggesting our Baby Name of the Day.

A sonnet is a type of poem, a form with specific rules. There are three major types, and then a bunch that break the rules but still count. The average person might not be able to recite much after Shall I compare thee to a summer’s day?, but would likely recognize Sonnet as a literary reference akin to Poem, Poet, or Fable.

The word itself comes from the Italian sonetto – little song, ultimately from the Latin sonus – sound. The term first appears in English in the sixteenth century, but sonnets had been written in Italian since the 1200s.

The short answer: not really.

Except we do find some examples in the past.

The late sixteenth/early seventeenth century French poet Thomas Sonnet de Courval came from a minor noble family. It’s heard as a surname in the US, too.

In those cases, it might come from the Saxon name Sinod, though it more often became Sinnott. Still, it explains de Courval and others. The Saxon name comes from sige – victory – and nod – brave, elements that endure in names like Siegfried and Leonard.

One last possible origin: the -et often signals a diminutive form. (Annette is little Anne.) Sonnerie is the French word for ring, as in the ringing of the bells, also from Latin. That makes it another cousin to Sonnet.

In any case, it’s virtually unused as a given name until the early 1970s.

The name was first given to five girls in 1972, and 14 the following year.

What explains the debut?

Avon released a fragrance called Sonnet in 1972. We know that perfume names are influential. Avon launched Pavielle, Toccara, and Charisma, to name just a few. So that’s one possibility.

A second (small) spike in the name’s use came in 1997. That’s a year after actor Forest Whitaker and wife Keisha Nash welcomed daughter Sonnet Noel.

Despite limited use as a given name, this is the age of River and Harmony, Autumn and Cadence. It’s easy to imagine parents short-listing Sonnet, too.

That’s a formula for an appealing choice.

Of course, just like Lyric – currently ranked in the US Top 1000 for boys and girls – and Story, there’s no reason this name couldn’t belong to the boys, too.

For now, it remains a rare choice, creative and intriguing. But it very much sounds like a name today, and could wear well on a child.