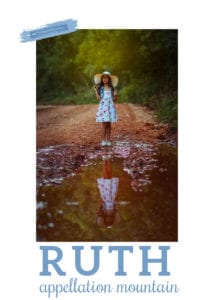 Biblical and brief, the baby name Ruth is a former Top Ten favorite. Is it ready for revival?

Ruth has her very own book in the Old Testament.

Her story goes like this: she’s an ordinary girl in Moab, who marries recent Israeli immigrant Mahlon. Mahlon and the rest of his male kin die over the years, and so Mahlon’s mom, Naomi, packs up to return to her home country. She’s not expecting Ruth to leave Moab; in fact, Naomi tells her to stay. But Ruth insists that she’s by her side, come rain or come shine.

Once they’re back in Naomi’s hometown, Ruth marries the wealthy Boaz and they all live happily ever after. Among her descendants? King David himself.

The name comes from a Hebrew word meaning friend – which feels appropriate.

The Bible gives us a loyal Ruth; there’s a royal Ruth, too.

Princess Ruth served as Royal Governor of the Island of Hawai’i in the mid-1800s.

In 1853, Elizabeth Gaskell penned Ruth, the tale of a respectable orphaned girl who despite many toils and snares, ultimately leads a virtuous life. A year later, Fanny Fern released Ruth Hall: A Domestic Tale of the Present Time. Her widowed Ruth went on to fame and fortune as a writer.

Were the novels the spark that made Ruth so very popular? It’s hard to say, in those decades before annual data exists.

But we know that Ruth ranked in the Top 100 choice when the US listings were first published in the 1880s.

United States president Grover Cleveland and his wife Frances gave the fashionable name to a child born in 1891. The new First Daughter was wildly popular. By 1892, the name ranked #5.

A few years later, Ruth went from the White House to the Red Sox, as George Herman Ruth, Jr. – better known as Babe Ruth – started his baseball career in 1914.

As a surname, Ruth isn’t related to the Biblical figure, but to the Middle English word reuthe – pity – which was probably given to those known for their charitable acts.

So … which Ruth gets credit for the candy bar?

The Baby Ruth candy bar came along in 1921. Despite claims that it had been named after Miss Cleveland, odds are that it had more to do with the athlete. Ruth Cleveland passed away from diphtheria in 1904. But in 1921, Babe Ruth was already setting records.

Others claim the candy was named after a company exec’s granddaughter.

What’s certain is that the name remained a Top pick through the 1950s, slowly declining in use, but remaining a popular pick for a daughter.

GINSBURG AND OTHER NOTABLES

Television matriarchs, from Lassie to All My Children to Six Feet Under, have worn Ruth, too, as has a white dragon in Anne McCaffrey’s Dragonriders of Pern series.

But none of those references feel especially current. What makes the baby name Ruth ready for revival today?

But Ruth works for lots of reasons – it’s tailored and traditional. And the ‘oo’ sound appears in favorites like Ruby and Lucy and June.

If you’re disappointed that Eleanor, Alice, and Grace are all so popular, Ruth feels like a logical substitute – easily recognized, but just a little different.

What do you think of the baby name Ruth?