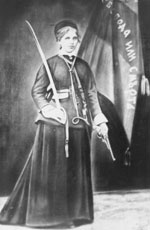 Thanks to Racheli for suggesting Rayna as our Baby Name of the Day.

There are names that have a clear, single origin – the poetic Pamela, the Scandinavian Astrid. Rayna just isn’t one of them.

She has multiple possible spellings, and a bunch of meanings, too:

There is a literary Raina, the heroine of George Bernard Shaw’s 1885 play “Arms and the Man.” While the play has faded into obscurity, there’s always the possibility of a revival. But Shaw’s Reina pronounces her name rah EE nah.

A handful of other uses includes:

The references feel a little lightweight, but there are some inspiring 20th century namesakes: a pioneering Bulgarian aviatrix, Rayna Kasabova, and soprano, Raina Kabaivanska.

And the list would be incomplete without Rayna Knyaginya, the Bulgarian Betsy Ross, a nineteenth century revolutionary who did jail time for sewing the fledgling nation’s flag. She’s the fierce woman in the black and white portrait in this post, and I can’t imagine her answering to Cailei.