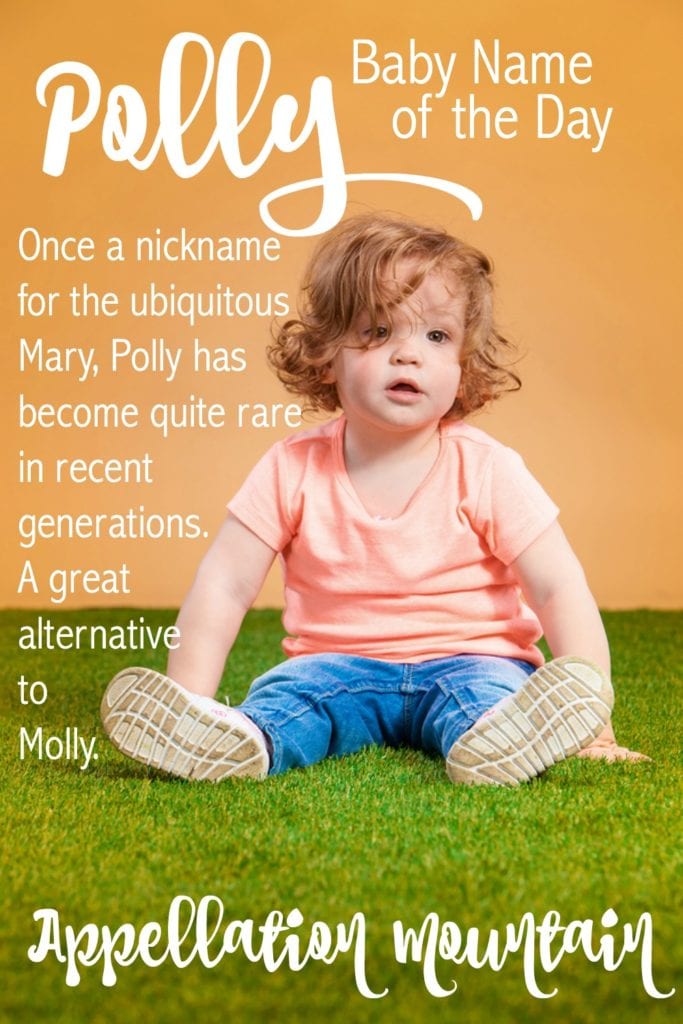 Polly has been overlooked for decades, even as Molly has become a modern staple.

Thanks to Claire for suggesting our Baby Name of the Day.

Mary – long a go-to name for girls – evolved into Malle and Molly over the years. For reasons that are lost to time, Molly’s M became a P, and voila – another nickname for Mary.

Name enthusiasts know all of this, of course. But a little Mary called Polly might cause confusion in 2016. They just plain sound like two separate names.

Besides, we can rattle off plenty of famous Pollys who did not answer to Mary – as far as we know.

The girl who puts the kettle on in the nursery rhyme answers to the name. So does Tom Sawyer’s aunt.

It’s been associated with parrots – and crackers – since at least 1616.

“Polly Wolly Doodle” was published in 1880, and sung by Shirley Temple on the silver screen in 1935.

In 1913, Eleanor Porter gave the name Pollyanna to the heroine of her novel. Porter’s girl was a super-optimistic orphan, selfless and always doing right. Mary Pickford and Hayley Mills are among the actresses to take on the role.

You might also think of the small dolls known as Polly Pockets, a sort of mini Barbie.

CS Lewis’ Chronicles of Narnia series includes a character by the name, as does Margaret Sidney’s Five Little Peppers.

Meg, the heroine of A Wrinkle in Time, grows up over several books and has a daughter named Polyhymnia – as in the Greek muse – who prefers Polly as a nickname.

Between the sunshiny orphan, the children’s toys, and nursery rhyme, this name can take on a sweet, even saccharine, vibe. But plenty of uses take this name in another direction.

It was the given name of actresses Holliday – if you remember 1970s sitcom Alice, she played sassy waitress Flo; Draper, of thirtysomething fame; and Emmy winner Bergen. Piper’s best friend, pre-prison, in Orange is the New Black, also answers to the name.

Proof that the name can – and does! – grow up nicely.

In 1728, John Gay penned The Beggar’s Opera, a satirical take on the Italian operas popular in London at the time. His Polly is the virtuous daughter of a criminal mastermind. After a whirlwind romance, she plans to marry Mack the Knife – also a crook.

Bertolt Brecht adapted it as The Threepenny Opera in 1928. Threepenny was originally German, but translations quickly followed.

The Kinks also recorded a song by the name. So did Nirvana. It’s the given name of alt rock musician PJ Harvey, too.

Jennifer Aniston wore the name in 2004 romcom Along Came Polly, but the movie failed to inspire parents.

It’s possible to see Polly as a nickname for Paulina, Penelope, Pomeline, or even Apolline. Some many of those names are quite rare, and it might be a stretch for popular Penelope.

And yet, if you’re seeking a sweet, simple name for a daughter that everybody recognizes but no one is using, this name belongs on your shortlist.

Why do you think Polly has been so neglected while Molly has become a favorite?

This post was originally published on July 1, 2011. It was substantially revised and reposted on June 30, 2016.