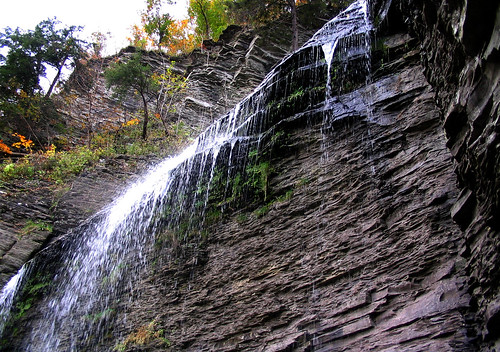 If the Social Security Administration tallied up variant spellings, Annalee would be one of the fastest rising names of our era.  Is this just an extreme respelling?  Or is she a completely separate choice with an intriguing history?

Thanks to Caitlin for suggesting Onnolee as our Baby Name of the Day.

In 2011, oodles of girls answered to some version of Annalee.  Besides the obvious – and most popular – smoosh spelling, there’s also:

So it would be easy to dismiss Onnolee as just another venture in creative respellings, save for this: she’s been around for ages.

Legend has it that Onnolee was an Indian princess, living in New York, in the Finger Lakes region.  Onnolee was a member of the Munsee nation, and by most accounts, the last living member of her people after a neighboring tribe attacked.  Onnolee was spared, taken as a prize by the chief of the rival tribe.  Instead of meekly accepting her fate, Onnolee stabbed her captor, and ran.  At Hemlock Lake, she jumped to her own death.  It’s said to have happened in the 1300s.

Nineteenth century poet W.H.C. Hosmer wrote about Onnolee, as well as many other Native American stories from history and legend.  Local ghost stories insisted that Onnolee continued to haunt the lake.  If you lived in the Finger Lakes region, Onnolee was almost certainly perceived as a romantic, poetic name.

While Onnolee never cracked the US Top 1000, census records show steady use, especially in New York state in the early twentieth century.  Farther back in history, Onnolee seems to have been used even farther afield.  Could I be missing an earlier popular telling of the story?

Let’s stick around New York for a minute, because here’s where it gets really interesting.  The fictional land where Puff the Magic Dragon and little Jackie Paper frolicked in the autumn mist was called Honalee.  Get this – the Peter, Paul, and Mary folk song was from a verse written by Lenny Lipton.  Lipton and Peter Yarrow were acquaintances at Cornell University when Lipton wrote the poem and Yarrow adapted it for music.  Cornell is located in Ithaca, New York, smack in the middle of the Finger Lakes region.

So Onnolee (and Honalee) were definitely in the air in New York, and had been for ages.  But is Onnolee a legitimate Native American name from the 1400s?  Maybe, but only if an awful lot of whisper-down-the-alley took place.  On- seems like a plausible first syllable, but the rest seems Anglicized.  The same process that transformed Lechaweki to Lehigh and Minisink to Munsee could have smoothed a less approachable name.

Overall, Onnolee is a romantic choice for a daughter – old-fashioned, with ties to legend, poetry, and the history of New York state.  Making a case for her as a legitimate Native American name is a stretch.  But if you find her on your family tree or if your family’s history traces back to the region, she’s the kind of gem to consider reviving.