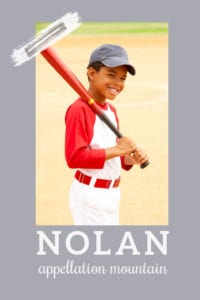 Thanks to Carolyn for suggesting our Baby Name of the Day.

The Irish given name Nuallán became Nolan in English.

The first element – nuall –  means noble or champion. Tack on that familiar -an suffix and it becomes a common surname choice.

Like many last names, it sometimes appears as a first, even before it became a favorite.

Born Lynn Nolan Ryan Jr., he made his professional baseball debut in 1966 with the New York Mets.

In 1999, the pitcher was inducted into the Baseball Hall of Fame. Ryan remained active in the sport, as president of the Texas Rangers and later an advisor to the Houston Astros.

He remains among the best known figures in baseball of our time.

While Ryan clearly influenced the rise of Nolan, he didn’t single-handedly introduce it to parents.

Instead, the baby name Nolan has ranked in the US Top 1000 every since years 1899. But it remained relatively rare, never charting higher than the upper 300s, and usually well above that mark.

As a last name and a first, it’s been worn by many athletes, as well as fashion designer Nolan Miller, who helped define the extravagant look of 80s television staples like Dynasty, and actors, too.

The name’s biggest bump came in 1979. But instead of a new factor, we’re back to baseball. That’s the year Nolan Ryan signed a record-breaking contract with the Houston Astros. Even if you weren’t a baseball fan, chances are you heard that Ryan had become the first player to earn a million dollars a year.

KEVIN and BRIAN, RYAN and AIDAN

The baby name Nolan follows logically from earlier generations of Irish favorites. Kevin and Brian grew up to name their sons Ryan and Brendan.

But the baby name Nolan fit right in, too. It’s distinctive – few names sound exactly like it. And yet it fits with so many favorites, like Rowan and Cole. And it’s only a sound away from Biblical chart-topper Noah, too.

But it’s not just a name for a kid bent on making varsity.

Fiction has given us very different Nolans, like the tech guru on Revenge. There’s also a character called Nolan in hit novel-turned-movie Ready Player One. He, in turn, is named for video game company founder Nolan Bushnell, who co-founded Atari in 1972. Nathan Fillion currently plays police officer John Nolan on ABC’s The Rookie.

We watched actor Nolan Gould grow up as Luke Dunphy on Modern Family.

If you’re looking for a friendly, accessible name with an Irish lilt, Nolan might belong on your list.

What do you think of the baby name Nolan?

First published on February 12, 2011, this post was revised substantially and re-published on June 2, 2021. 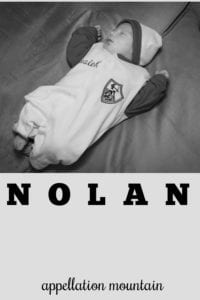