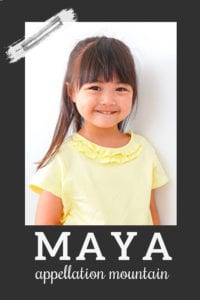 The baby name Maya is a relative newcomer to the US, but it feels like a classic.

In Sanskrit Maya means illusion. Buddhist tradition tells us this is name of the Buddha’s mother, but the name is also associated with goddess Durga.

Brazil’s Tupi people also use Maya to mean mother. (Though that source, too, points to several other meanings and origins.)

The baby name Maya can also come from Greek myth. More often spelled Maia – meaning mother – she’s the eldest of the Pleiades, seven sisters forming a constellation in the night sky. The daughter of Atlas and the mother of Hermes, Maya’s name fits right in with so many mythological borrowings, a little less classic than Diana, but more wearable than Aphrodite.

The Maya civilization comes to mind, too. Not only do the ruins of temples and cities in Mexico and Central America still stand today, but six million Maya peoples still live across the region today. 21 Mayan languages remain in use. It’s worth noting that Maya is a big tent, encompassing many indigenous peoples.

Those roots feel deep and consequential, but there’s another reason Maya seems traditional to an American audience. In some Slavic and Scandi languages, Maja is short for Maria. It doesn’t get much more classic than that.

But how did the baby name Maya come to be used in the US?

Playwright Simon Gentillon wrote Maya in 1924. It was wildly successful and much-translated. It became a French movie starring Viviane Romance. A mega-star of French cinema – word is that she refused offers to come to Hollywood – Romance was at the peak of her career in 1949, when the adaptation was filmed. In the movie, there’s no question about the title’s significance. It was chosen because it means illusion – a character tells us so.

Still – the numbers hint at a connection. The baby name Maya first begins to appear in the French data in 1948; in the US data, in 1949.

Other midcentury Mayas include avant garde filmmaker Maya Deren. Born Eleonora Derenkowska in Kiev, she adopted the name Maya at the suggestion of her then-husband while working on her first film. He, too, referenced the Sanskrit meaning illusion.

Legendary ballerina Maya Plisetskaya might have been on some parents’ radar, too. Persecuted because of her family’s Jewish heritage, Plisetskaya nonetheless became a prima ballerina with the Bolshoi. Foreign visitors marveled at her craft – until the Soviet Union agreed to let her tour internationally. She appeared in the US for the first time in 1959, and met the Kennedys at the White House in 1962. Her career spanned several decades more, including stints as artistic director for several major European ballet companies.

But there’s one Maya whose presence transformed the name for an American audience.

Born Marguerite Johnson, the future writer adopted her stage name while performing in night clubs in the 1950s. It’s a combination of her married surname and her childhood nickname from older brother Bailey: my-ah sister.

Her groundbreaking 1969 autobiography I Know Why the Caged Bird Sings is considered a literary masterwork. And it’s only the beginning of her long career. Angelou’s works included the 1978 poem “And Still I Rise,” six more autobiographical works, and too many poems to count. She composed music, directed a movie, was nominated for a Pulitzer and a Tony, and won three Grammys. In 2011, she was awarded the Presidential Medal of Freedom.

But that doesn’t begin to describe her legacy.

Angelou worked tirelessly for Civil Rights. She was an in-demand speaker and lecturer, as well as a professor at Wake Forest University. Her story tells of overcoming tragedy and trauma to build a diverse and boundary-challenging career.

It speaks to the impact of Angelou’s first memoir.

But it also built on so much accumulated energy. The baby name Maya reflected a changing world – one where parents sought different kinds of names, ones that were more global and meaningful, but also sounded just slightly different than the earlier generation of Linda, Patricia, and Barbara.

It wasn’t just Angelou – not for long.

Born in 1959, the artist Maya Lin was still an undergraduate at Yale when she earned the 1981 commission to the create the Vietnam Veterans War Memorial in Washington DC.

In the late 1990s, the sitcom Just Shoot Me introduced us to the staff at Blush, a fictional high-fashion magazine. The team included Laura San Giacomo at Maya Gallo, the hard-working and high-minded daughter of the editor.

The early 2000s also saw the beginning of comedian and actor Maya Rudolph’s career. Joining the cast of Saturday Night Live in 2000, Maya raised the rising name’s profile. But she also took it back to its roots. Born in 1972 to a Jewish father and African-American mother, Maya’s name was immortalized in song. Her mom, Minnie Riperton, sings “Maya, Maya, Maya” at the end of her 1975 hit “Lovin’ You.”

Another factor? The rise of the name Mia, which soared right past the baby name Maya, reaching the US Top Ten. Most years, Mia has been just slightly ahead of Maya, holding open the door for this similar, but slightly different choice.

The baby name Maya isn’t quite like Elizabeth or Jane.

And yet, it does feel classic. Enduring, versatile, well-established, even if not quite traditional in the English-speaking world.

Maya fits in nearly any where on the planet, for a child or an adult, across barriers of race and religion.

It’s a name that transforms from a Russian prima ballerina to an African-American literary force. It’s impossible to pigeon-hole, a name that suits every woman and any woman equally well.

If you’re after a pan-global name for a daughter that can travel the world and still feel perfectly accessible in the US, the baby name Maya might be for you.

What do you think of the baby name Maya? 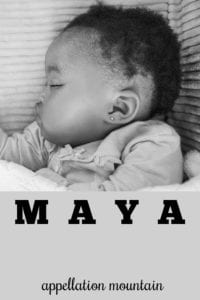