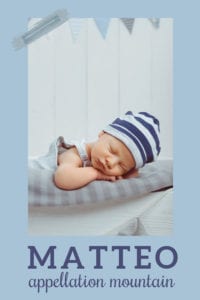 Thanks to Marta for suggesting our Baby Name of the Day.

Matthew ranked in the US Top Ten from 1974 through 2007, a Biblical boy name with a long history of use.

Saint Matthew was one of the twelve apostles, a witness to the Resurrection, author of the New Testament’s Gospel of Matthew.

You would expect to find a version of Matthew in every European language, and so there is – from Mads in Danish to Matvei in Russian. Mathias and Matthias are very common, too.

But Matteo seems like one of the most familiar international variants of evergreen Matthew.

Or maybe that should be Mateo.

Celebrities from Colin Firth to Ricky Martin have given the name to their sons, a mix of single-T and double-T spellings.

Strictly speaking, the single t spelling is Spanish – and common throughout the Spanish-speaking world – while the double t is Italian, popular in Italy today.

Mateo ranks in the US Top 40 – well ahead of Matteo.

We can all name a famous Matthew, from actors like McConaughey and Damon to historical figures like Commodore Perry.

But Matteo offers every bit as much history.

Matteo Visconti ruled Milan in the 1300s. In the sixteenth century, Matteo Ricci was one of the first Jesuit priests to serve in China. Field Marshal Mateo de Toro Zambrano became the first president of newly independent Chile in 1810.

The list goes on and on, with athletes, composers, artists, and more adding to the list over the centuries.

But this name’s appeal isn’t down to history.

Chances are parents are drawn to the baby name Matteo because of that last letter.

They make great crossover names, too. Spanish language favorites like Diego, Antonio, and Santiago all wear well in the US.

The baby name Matteo bridges a gap between the familiar, boy-next-door Matthew and a modern, international choice. It makes a great choice for parents seeking a culture-spanning name, and an equally good option for families intent on finding a not-too-familiar, but not-too-out there option for a son.

Would you consider the baby name Matteo for a son? Do you prefer it with one T or two?