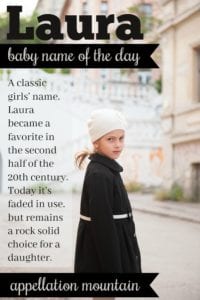 Laura counts as a classic girl’s name, ranking in the US Top 1000 every year since 1880, and spending most of those years in the Top 100.

We’ve been taking inspiration from the Latin laurus for ages. It comes from the laurel tree, the source of leaves used to weave ceremonial crowns in the ancient world. Romans gave them to victors in sporting or military endeavors. The Greeks used them, too; the god Apollo is pictured wearing one.

That ties Laura to the natural world, but also to ideals of achievement, too.

Around the third century, Laurus was used as a masculine given name. The feminine form follows logically.

In ninth century Cordoba, a window joined a convent, eventually becoming the abbess. Then came the Muslim invasion, and persecution of Christians. Public worship carried a death sentence. The abbess defied the law, and met her death in a vat of molten lead.

It’s the kind of gory story oft-repeated in the Middle Ages, and depicted in works of art, too.

But the name didn’t catch on in English – at least not then.

There’s also the Laur- name Laurence. Strictly speaking, it comes from the place name Laurentum, a city in the ancient world. But Laurentum also derives – probably – from laurel. So they’re cousins, if a bit removed.

There’s a third century Saint Laurence, a martyr known for refusing to hand over the riches of the church. (Well, when he finally did produce the church’s wealth, he brought in a large group of the faithful poor, explaining that their devotion was the real treasure.) For his troubles, he was roasted alive.

His name did catch on for boys during the Middle Ages, possibly because of a second St. Laurence, this one dating to the seventh century.

That probably explains the use of Laurentia and a handful of other Laur- names for girls in English earlier.

Then along came Petrarch.

The fourteenth century Italian poet was inspired to some of his greatest works by a woman. It’s not clear that she was a real person, but scholars speculate that the married noblewoman Laura de Noves might have been the object of Petrarch’s unrequited love.

It was his works, and his frequent use of the name, that slowly pushed it into wider use in the English-speaking world.

By the late eighteenth and nineteenth centuries, famous women by the name are plentiful. They include:

It ranked in the Top 20 in the 1880s, and while it slowly fell afterwards, it never went far.

Back in 1944, Gene Tierney played the ill-fated Laura Hunt in a movie by the name.

Miss Hunt died of a gunshot wound in her own apartment. Suspects abounded. The beautiful Miss Hunt worked as an advertising executive. The detective investigating her murder becomes obsessed with seeing justice done, but also with the woman herself.

Only then it turns out that she’s not dead at all. Instead, the body they found belonged to a model who’d worked with Miss Hunt previously. Now the race is on to find the real killer and protect Laura before he tries again. I won’t spoil it for you, but things do end happily enough.

The movie was based on a 1943 novel by the same name, and the movie’s title shared it, too. The song and the movie were successful. In fact, the movie is preserved on the Library of Congress’ National Film Registry.

There’s a bump in the name’s use following the movie’s release. It entered the US Top 100, and started to climb.

One of the nineteenth century Lauras played a small part in that, when Ingalls Wilder’s novels were adapted as a hit television series.

The years also gave us:

Laura: On the Radio

There’s the title track from the 1940s movie, of course. But there’s also “Tell Laura I Love Her,” recorded by Ray Peterson in 1960. In the mid-80s, it was Christopher Cross with his mournful #1 hit, “Think of Laura.” Cross based his song on the real-life story of a girl by the name he’d known, killed in an accident.

It was more than enough to keep the name on the top of the popularity charts for years.

After so many years of heavy use, both for real people and in pop culture, no surprise the name started to fade. As of 2017, the former Top 20 favorite ranked a chilly #340.

That puts this name in a different category than Elizabeth, or even Katherine. At first glance, you might mistake it for a trendy choice, a sister for Ashley and Heather.

And yet it doesn’t detract from Laura’s classic status. It would still wear well for a daughter born today – or twenty years from now. In fact, it might be one of those perfect everyone-knows-it, but no-one-is-using-it kind of choices.

What do you think of Laura? Do you consider it classic, dated, or something else entirely?