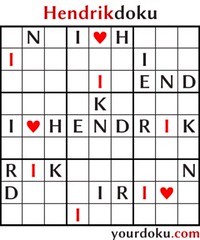 Henry is regal. Hendrix is rock royalty. This choice falls somewhere in between.

Thanks to Christy for suggesting Hendrik as our Baby Name of the Day.

Henry has been around for centuries. The Normans brought him to England, and the English have been ruled by an octet of Henrys. The French had five kings Henry, and there have been plenty of distinguished figures in the aristocracy, the church, and all realms of endeavor.

More recently, Henry has been a constant in the US Top 200, often ranking in the Top 100 and even making a few appearances in the Top Ten.

He’s an enduring classic, with oodles of spin-off names. A boy wizard made short form Harry stylish. Surname picks like Harris and Harrison are current, too.

But Hendrik and Henrik are largely overlooked in the US. Thanks to Danish royals, a Norwegian playwright, and a Swedish ice hockey star, Henrik feels like the Scandinavian option, while Hendrik feels more German. The line isn’t quite so clear and bright, though.

Likewise, you’ll find people answering to many surname forms of the name, including Hendricks and Hendrik and just Henry, too.

One of the appealing things about Hendrik is his -ik ending. For years, every boys’ name seemed to end in -n. Today, -r names like Asher and Gunnar are joining Connor in classrooms across the US.

Add in foreign names, ends in -ek diminutives like the Slavic Darek or Janek, and old school choices like Theodoric and it is an electic bunch. It is easy to imagine parents gravitating to the sound in search of something just a little different.

There are more figures like these – appearing in history books, but far from household names. Throw in a few athletes and odds are that you’ll hear Hendrik worn at some point.

The question is whether he’d wear well on a child born in 2011. Rick is dated, but Hank is a Henry nickname on the rise. On sound alone, it is no stretch to imagine parents discovering Hendrik.

Hendrix seems likely to catch on, but he’s more Jaxon than Alexander – the x feels just a little bit flashy.

Hendrick falls somewhere in between – he’s different, but seems restrained and dignified. He could use short form Hank or Harry.

Maybe the biggest challenge with Hendrick is one shared by many international variants of well-established names: they retain their classic status, but you’re still stuck spelling and explaining them, just as if you’d plucked a name out of the clear blue.

And yet that’s part of his charm, too. Hendrik is just a little bit different – so if that’s what you’re searching for, he could be the perfect fit.