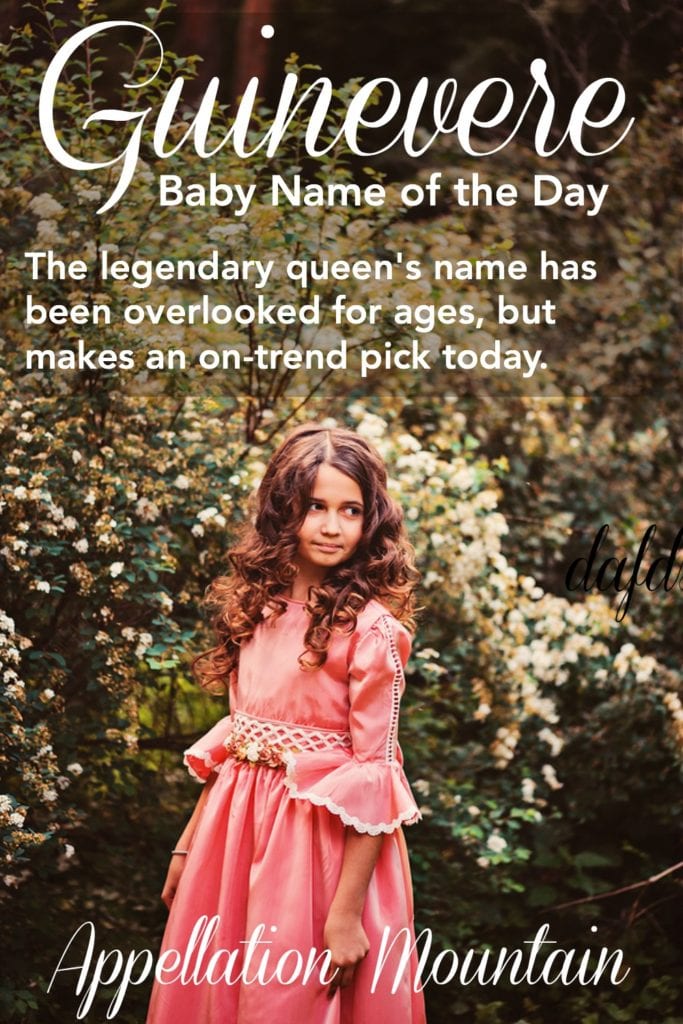 Guinevere reigned in Camelot and inspired the top name of the 1970s, too. But that hasn’t translated to mainstream use as a baby name – yet. Will a new movie make the difference?

Thanks to Angel, Charlotte, and Mary Renee for suggesting our Baby Name of the Day.

You know someone named Jennifer.  I just know that you do – your sister, an aunt, a neighbor, a colleague, a friend.  After all, the name dominated the top spot for more than a decade, and first entered the Top 100 back in 1956.

Of course, the name has more than tripled in use since 2010, so remember that rare is relative.

What connects Jennifer and Guinevere? The original name comes from Welsh. The first element means fair; the second, either phantom or wave. It started out something like Gwenhwyfar.

Geoffrey of Monmouth Latinized it as Guanhumara. The Italians remade it as Ginevra, while the Cornish transformed it to Jennifer.

Jennie and Jenny predate Jennifer as a short form of Jane; today, though, they’re simply part of a former number one name.

Because few women have answered to the name, we recognize the most famous Guinevere immediately. She reigned alongside King Arthur in Camelot. The happy ever after ended abruptly when the queen fell for the handsome knight Lancelot, and the betrayal brings down Arthur’s rule.

Versions of the story vary, from the rich and varied medieval tales to the Broadway version most of us know today. Descriptions of the queen vary, too, from a heartless schemer to a hopeless romantic.

Maybe the character’s ambiguous nature gave parents pause. After all, the story has been told and re-told countless times. Julie Andrews played the ill-fated queen on Broadway in the 1960s: Vanessa Redgrave donned the crown for the 1967 film version. Neither actress was the first to take on the role, either – it’s been adapted on stage for over a century.

A few prominent women answer to the name, but most uses are fictional:

Two factors explain the recent rise in use – and could signal more to come.

First, the fifth season of ABC’s successful fairytale series Once Upon a Time took us to Camelot. That comes a little too late to boost the name, though. And while a 2017 movie stars Charlie Hunnam as King Arthur, we’ll have to wait and see if it proves a hit.

If you love dramatic, literary, vaguely medieval, and distinctive names, this one belongs on your list. As nickname-rich as Elizabeth, as familiar as Charlotte, file Guinevere with familiar names that no one is using – for now.

Do you think this name will continue to rise?