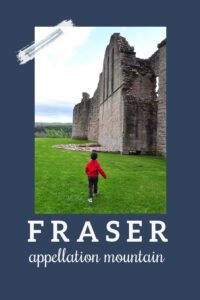 Regardless of spelling, this name started out as a surname.

But it’s not exactly clear where the surname came from, or what it means.

The ‘de’ suggests a place name, but no village or region in France neatly matches up.

Some speculate that the original name was whispered down the alley by Anglo-Norman scribes, becoming impossible to recognize.

There is a village called Fresles in Normandy, though it’s tiny. And other hints about the family can be found on old maps.

We do know that the name – in some from – likely traveled from France to Scotland.

And there, over the following centuries, it became as Scottish as haggish.

That hasn’t stopped us from trying to discover the meaning, though.

Some connect it to an Old French word meaning ribbon or braid.

A popular theory is that Fraser refers to strawberries. In French, strawberry is la fraise.

The Fraser coat of arms includes strawberry flowers, and there’s even a story about an early family member gifted strawberries to the king of France, and thus earning the name.

But it seems likely that Fraser came first, and the strawberries added as a play on words.

Regardless of meaning or origin, Fraser – this spelling – is among the most common surnames in Scotland, right up there with Campbell and Stewart.

But it’s not a given name.

Except that American families do tend to bestow surnames on their children as firsts, especially a mother’s maiden name.

Even tallying up all of the possible spellings, the baby name Fraser remains quite rare.

And yet, it’s instantly familiar.

Thank the small screen for that.

We first met Dr. Frasier Winslow Crane on the hit sitcom Cheers in the year 1984. The show, set in a bar in Boston, centered on a will-they/won’t-they relationship between bar owner Sam and waitress Diane. At one point, Diane jilted Sam for the far more cultured and sophisticated Frasier.

While it wasn’t the original plan, Frasier became a series regular, even after he and Diane split. In fact, Diane left the show, but Frasier stayed. We eventually meet his new wife, Lilith.

After Cheers ended, it’s said that Lilith and Frasier divorced. And Frasier moved home to his native Seattle.

1993 spin-off Frasier featured the doctor launching a radio call-in show where he dispensed advice. We also met his father, Martin, as well as his brother, Niles.

That makes the good doctor one of the longest running fictional characters of all time. After all, Cheers was a smash hit, and Frasier was every bit as big. He won Emmys and Golden Globes playing the part.

But he didn’t move the needle on children being named Frasier – in any spelling.

Of course, plenty of famous figures answered to the surname.

Actor Brendan Fraser and musician Andy Fraser of Free come to mind. Boxer Joe Frazier, world heavyweight champ from 1970 to 1973, left his mark on the name, too.

Outlander fans will think of Jamie Fraser. The first of Diana Gabaldon’s time-hopping novels was published in 1991. So far, nine novels in the series have been released, the most recent in 2021, and a tenth is planned. The television series based on the books debuted in 2014. Season six is set to debut in 2022.

Of course, Fraser Fir trees are another famous reference.

Since they’re often used as Christmas trees, it could be a subtle way to acknowledge a baby born over the winter holidays.

Or it might just make the baby name Fraser enough of a nature name for parents already considering Rowan.

If two pop culture sensations can’t persuade parents to consider the baby name Fraser for their boys, is it set to remain a rarity?

Maybe. But consider that Cheers/Frasier and the Outlander novels debuted some time ago.

Surnames – completely unconnected from our families and heritages – have become completely mainstream.

That opens the door for the baby name Fraser.

As it happens, CBS recently announced that a Frasier reboot is coming to Paramount+ in 2022.

Could it be just enough to push this name into the mainstream?

With plenty of spirit and an on-trend sound, Fraser seems like the kind of undiscovered gem that parents could embrace – particularly if honoring Scottish roots matters.

What do you think of the baby name Fraser? 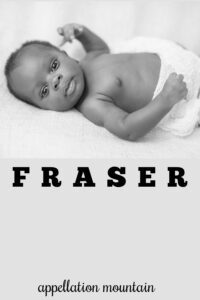