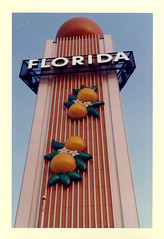 Florida exhibit from the World's Fair 1964; Image by karen horton via Flickr

Thanks to Kathleen for suggesting Florida as our Baby Name of the Day.

Despite the images she conjures, Florida properly belongs in the company of pan-botanicals like Flora, Florence, and Fleur.

Juan Ponce de Leon landed on the state’s shores in 1513 and immediately dubbed his discovery Florida – flowery land. De Leon landed during Easter, and there’s a tie to the holiday, too – pascua florida is a Spanish phrase to refer to the Easter season.

If you’re not from the US, you might point out – and rightly so – that there’s more than one Florida, especially in the Spanish-speaking world.

I’d be remiss if I didn’t mention a gentle literary link, too – grupo Florida was a gathering of South American literary leaders. They met in Buenos Aires, at a cafe on Florida Street, in the 1920s. This lends a romantic air to the name, as Argentine politics would soon turn repressive.

Back to the US. Florida charted just about every year from 1880 into the 1930s, suggesting that the name carried the kind of exotic place name status that we might attach to Avalon or Catalina today.

From 1880 into 1930s, Florida was among the Top 1000 given names for girls in the US. That tracks with the most famous bearer of the name – a fictional television character.

When Florida first appeared on television, she was a housekeeper on the sitcom Maude. Actress Esther Rolle was soon promoted to the lead character in Good Times. While her name was still Florida, many of the other details of her life were changed. Florida and family – husband James, sons J.J. and Michael, and daughter Thelma, lived in the Chicago projects. (The footage implied that it was the infamous Cabrini-Green housing project, but it was never explicitly stated.) The show was famous for many things, including son J.J.’s tagline: Dy-no-mite! Rolle’s character was admirable, but she was definitely a matriarch – not the kind of character likely to inspire parents.

Still, that’s not why Florida fell. Could it be that the real estate bust tarnished the name? Florida boomed in the 1920s. A real estate speculator even put a huge billboard in Times Square announcing “It’s June in Miami.” By 1925, the party was over and it would be decades before some parts of the state recovered.

Today Florida does conjure up some amazing places – think of Key West or Miami. Florida appears in the name of several types of trees – there’s a Florida Yew, a Florida Maple, a Florida Royal Palm, a boxwood, and a buttonwood, and many more. If you’ve ever been off the beaten path, the state’s natural beauty is undeniable.

Today, Good Times is unfamiliar to the next generation of parents, and place names like Georgia and Carolina are mainstream. Even Orlando, the town dominated by Disney World, has reclaimed some of his swashbuckling style.

Florida can share the nicknames used by other Flor- options: Florrie, Flossie, even Flo. She’d be an undeniably unusual choice, but somehow, the more I think about her, she’s not so different than Savannah or Brooklyn. If you’re looking for a daring but familiar choice for a daughter, Florida might be one to consider.