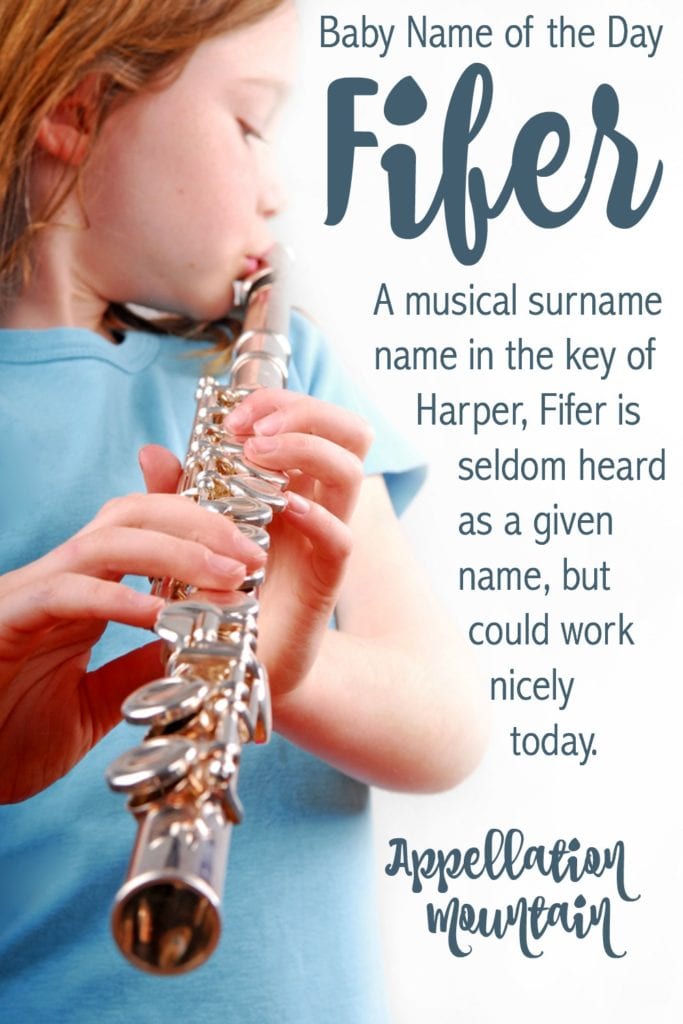 Fifer is a cousin to musical surname favorites like Harper and Piper – but is much more rare.

Thanks to Marissa and Quiana for suggesting our Baby Name of the Day.

As you probably guessed, Fifer is just a slimmed-down spelling of the German Pfeiffer.

Pfeiffer started out as an occupational surname for someone who played a pfife or fife – a pipe, ultimately from the Latin pipare – pipe.

A pfeiffer wasn’t just a musician. The term often referred to someone who went to war.  Along with the drum, the fife was how orders were relayed to troops on the battlefield. The term is preserved in Fife and Drums Corps, a type of military field music still played today by re-enactors.

Back in the day, musicians were usually boys much too young to be soldiers. That might make this a likely name for a son, but there are reasons to think it might be more popular for a daughter.

As for exactly what kind of instrument we’re talking about, it wasn’t exactly a flute. A fife is a simpler instrument, more like a piccolo.

No one is using Fifer as a given name.

Really – no one! Not only has this name never cracked the US Top 1000, it’s never been given to even five children in a single year. I found fewer than a dozen Fifers between the 1920 and 1940 US Censuses.

And yet, there are reasons to think that the name could work.

Fifer: On the Map

There’s a second association for the name. Fife, in Scotland is home to St. Andrews, with its legendary golf course and historic university.

Previously recorded as Fib and Fif, Fife is believed to be one of the kingdoms of the Picts, a Gaelic tribe who flourished from the late ancient to to the early medieval era. The place name’s meaning is lost, but a person from the area is known as a Fifer.

This could make the name a Scottish heritage choice.

Patrick Dempsey has a daughter called Talula Fyfe, along with sons Sullivan and Darby. That’s the closest I could get to a high-profile birth announcement featuring the name.

Fifer: The Name No One is Using

If you’re after an on-trend name that is almost never heard for a child, Fifer is a good one to add to your lists. It works well for a boy or a girl, and is so squarely on-trend that it would almost have to wear well today.

Would you rather use Harper, Piper, or Fifer? Do you think this name can catch on?