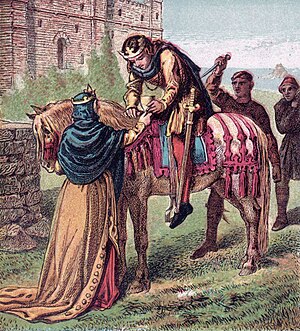 She’s a moldy oldy, a name headed for extinction.  Or is she?

Thanks to Ali for suggesting Elfrida as our Baby Name of the Day.

Frida has a certain hipster cred, thanks to artist Frida Kahlo.  In fact, this spelling has only charted since 2001, the year before Salma Hayek’s Oscar-nominated performance in the biopic Frida.

Frieda is a different case, a name modestly popular in the late nineteenth and early twentieth centuries.  If you find her on your family tree today, odds are you’ll cruise right past, not considering her an option.  She last appeared in the US Top 1000 in 1958.

Then again, once fusty Frederick sounds dashing once more, suggesting that all of his cousins – and Frieda is among them – could make a resurgence.  Frieda shares his roots via Friedrich, from the Germanic frid – peace.

Elfrida and Elfreda have a completely separate origin, though.  Think of Alfred and you’ll be on the right track.  The el refers to elf, and the -frith means strength.  The original spelling of her name would’ve been closer to Ælfthryth.  This is one of those Anglo-Saxon appellations that we remember thanks to royalty.

There’s a great story surrounding Elfrida.  King Edgar of England reigned from 959 through 979, but his coronation took place near the end of his reign.  By that time, he’d married Elfrida and she was crowned queen by his side – possibly the first time a queen consort was afforded the privilege in England.

It is not known if their marriage was happy, but legend has it that Edgar went to great lengths to win her.  Hearing rumors that Elfrida was a stunner, he dispatched a nobleman to investigate.  Edgar’s courier reported that the reports were false – and married her himself.  Edgar got wise to the deception, offed his not-so-loyal courier and finally wed the beauty.  There’s a monument erected in the nineteenth century known as Dead Man’s Plack, said that it marks the spot where the two suitors squared off.

Elfrida must have been pretty fierce.  After Edgar died, his son by another woman, Edward, inherited the throne.  Elfrida ordered his murder to clear the way for her ten year old son, Ethelred.

Still, Elfrida wasn’t the only bearer of her name, and the aelf element was common element, appearing in masculine names like:

And feminine ones, too:

Anglo-Saxon tradition tells us that elves were the causes of illness and other problems.  It isn’t clear if the aelf names were meant to ward off such problems, or if there was an earlier, more positive understanding of elf to account for the flood of appellations.

Elfrida feels almost unwearable today, and yet she’s remained in sparing use through the years: a Swedish feminist and composer, an Austrian poet, a German soprano.

In 2012, easy nickname Ellie would make Elfrida easy for a child, while Effie embraces her quirky charm, and Frida has a certain style, too.

If this one is tucked away on your family tree, she’s worth a second look.