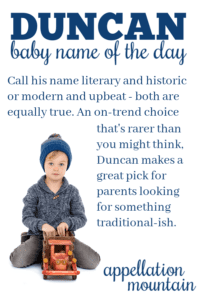 Duncan brings to mind basketballs and doughnuts – but also Scotland and Shakespeare.

Thanks to Whitney for suggesting our Baby Name of the Day.

Kings aplenty have answered to this name, as early as the 600s. An eighth century Saint Dúnchad might sometimes be recorded as Duncan, too.

And then there’s King Donnchadh. He reigned in the eleventh century. His successor? Macbeth, in 1040. That’s where fiction kicks in. Donnchadh wasn’t elderly, and he died in battle. Contemporary accounts paint Macbeth as a reasonable ruler. There’s no treachery mentioned.

In Macbeth, the prophecies of three witches set the play in motion. Their predictions unleash Macbeth’s political ambitions, and those of his wife. Murder and madness follow, though order is restored by the end.

Shakespeare wasn’t the first to impose a twisted tale on a handful of historical figures. Holinshed’s Chronicles, first published in 1577, detailed British history over many a century. The Bard was borrowing from the not-quite-historical account.

The Chronicles and the playwright crafted the play we know so well: a skilled, but overly ambitious, lieutenant, egged on by his equally ambitious wife and a trio of cackling witches, commits regicide and frames the king’s servants. Of course, the name Duncan belongs to the victim, not the villain.

It comes from elements meaning brown – think dun, as in dark – and warrior or battle.

There’s a later king of Scotland by the name, and it’s fairly common as a surname, too. It’s ranked in the US Top 1000 every almost year since 1880, though it’s rarely made the Top 500.

All of this makes the name a fitting choice for a Highlander character. The fantasy action-adventure about an immortal warrior has covered multiple movies and television series, plus novels and comic books. The original Highlander is Connor; Duncan first takes over for him in the first 1990s television series.

Over the last century or so, a variety of other images attached to the name.

The yo-yo has existed since at least a few centuries BC, but Donald Duncan made it a staple of American childhood beginning in the 1930s. They’re still manufactured under the brand name, nearly a century later.

When traveling salesman Duncan Hines couldn’t get a decent meal on the road, he authored one of the first travel guides to help others do just that. Eventually, the cake mixes that bore his name became far more famous, and are still sold in nearly every American grocery store today.

As for Dunkin’ Donuts and thoughts of basketball, well, that’s from the German dunken – to dip. There’s no relation between the name and the verb, but the sound is the same.

And then came 1997, when the first overall pick in the 1997 NBA draft was Tim Duncan. He went on to play 19 seasons with the San Antonio Spurs, becoming a two-time NBA MVP in the process, along with arms full of other honors and awards.

Duncan: By the Numbers

The name peaked in the late 1990s, at a moment it was associated with the hoop star and the indie rocker. Names like Dylan and Devin ranked in the Top 100 at the time, making it a similar-but-different choice.

Overall, the name feels upbeat and accessible, but without sacrificing gravitas. After all, it’s as literary as it is athletic, as tied to history as it is to the humble yo-yo.

If you’re looking for names instantly recognized but seldom heard, easily spelled and pronounced, then this might belong on your list.

What do you think of Duncan?

This post was published originally on August 1, 2012. After substantial revision, it was re-posted on February 13, 2019.