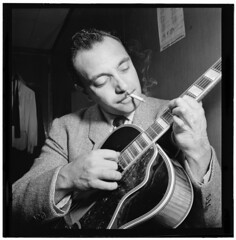 He’s a nickname set to supernova on the big screen.

In honor of the jazz great and an upcoming Tarantino movie, our Baby Name of the Day is Django.

Django is an improbable name.  Besides the silent D, Django has something else in common with the recently profiled Djuna – it appears to have been an invention specific to its most famous bearer.

Django Reinhardt was born in Belgium to a family of gypsies.  His given name was Jean or maybe Jean-Baptiste, like his violin-playing father, but somewhere along the way he picked up the nickname Django – “I awake” in Romani.  Or so they say.  Romani isn’t one unified language – it is multiple dialects or perhaps even several closely related languages.  The alphabet wasn’t standardized until 1990 – many years after Reinhardt’s 1910 birth.

Reinhardt was always musically inclined, and his instrument of choice was the guitar.  He was already earning a living as a musician when a fire left him badly injured, paralyzing two of his fingers.  His greatest achievements came after the tragedy, as he learned a new style of playing, discovered American jazz, and formed Quintette du Hot Club de France with violinist Stephane Grappelli.  Even today his work – like the zippy “Daphne” – sounds fresh and distinctive.

He’s not as well known as Louis Armstrong or Duke Ellington, but his reputation has grown in recent years.  His music appears in several Woody Allen films, most notably Sweet and Lowdown.  He makes a cameo in 2011’s Hugo, too.

All of this means that any Django you meet is likely named after Reinhardt, including a now-defunct New York City restaurant and more than one type of software.  Actors Nana Visitor and Alexander Siggid gave the name to their son in 1996.

He’s also a favorite with fictional characters.  There’s a long-tailed Django in 2007’s Ratatouille – he’s Remy’s dad – and another in Disney’s animated hit Phineas and Ferb.  The animated Django loops back to another real life boy – Django Marsh, son of Phineas and Ferb’s co-creator, Jeff Marsh.

But many of the Djangos are of a less G-rated bent.  In recent decades, Django was more big screen cowboy than spritely jazz artist.

In 1966, Franco Nero played a gold-stealing bandit in a hyper-violent Western.  The film and the character were both called Django; sequels and spin-offs kept the character alive into the 1980s.  Now Quentin Tarantino is poised to release his Django Unchainedat year’s end; it isn’t a sequel, but appears to share a certain flavor.

There would not have been Djangos in the Wild West, of course – the name didn’t exist in the nineteenth century – but there could be Djangos aplenty in coming years.  Lose the D, and there’s Jango Fett, a bounty hunter from the Star Wars universe, as well as famous clown Jango Edwards, born Stanley.

Django feels something like Atticus these days.  He’s over-the-top extravagant, but still wearable.  The jazz reference, plus the complicated, but not impossible spelling, makes him effortlessly cool.  If anything, too cool – Django still feels like a name chosen by parents seeking the impressive.  If you’re confident that you’ll be able to pull off calling out Django on the playground, he’s a tempting appellation.