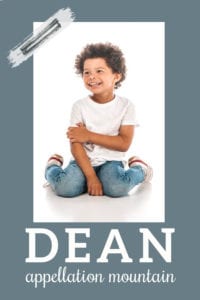 The baby name Dean covers a lot of territory in just a single syllable.

Dean started out as a title, originally for a leader of ten men in the Roman army. It later applied in civil and religious settings, too. And by the sixteenth century, it referred to an administrator in an academic setting – Dean of Students, or perhaps Dean of a specific college.

The last use is the one that remains most familiar today.

In some cases, it led to the surname Dean.

But Dean can also come from the Old English denu – valley. That makes the baby name Dean a place name and nature name, too – at least some of the time.

A dean had a place in Christian religious settings. But it also sounds the same as deen, an Arabic word that translates as faith. It’s also spelled Din.

That adds a layer of meaning, and adds some potential cross-cultural appeal to the baby name Dean, too.

FROM DEAN TO DINO

Speaking of cross-cultural names, Dean matches up neatly with Dino.

In romance languages – especially Italian – families tacked -ino onto boys’ names. (Think Bernardino or Martino.) Names ending with -dino and -tino could shorten to Dino. Eventually, Dino stood on its own, too.

Dino Crocetti, the son of Italian immigrants in Steubenville, Ohio, re-invented himself as a world-famous performer. He took the name Dean Martin.

His long career spanned the 1940s into the 1980s. A member of Frank Sinatra’s Rat Pack, Martin’s career spanned live performances, recordings, television, and film. Known as “the King of Cool” for his unshakable confidence, Martin ties the name to midcentury cocktail culture. You’ve almost certainly heard him croon “Volare” or “You’re Nobody Till Somebody Loves You.”

He made Rebel Without a Cause and East of Eden in 1955, and Giant one year later. In 1956, he died in a car crash at the age of 24. Dean became the first actor to win a posthumous Oscar. But more than his movies, he’s a cultural icon. We all recognize James Dean – especially the Rebel movie pose – even if we’ve never seen his movies.

Songs by everyone from The Eagles to The Wrecks immortalized him.

The actor endowed the baby name Dean with a perpetual cool.

It reached the Top 100 in 1956, a mix of Martin and James pushing the name into greater use.

It was the age of Scott, Todd, Troy, and Craig. They were cool, edgy, different – names that stood out compared to the classic stand-bys that topped the popularity charts for so long.

But by the 1990s, the name had fallen into the 300s – not obscure, but far from stylish. A new generation of brisk boy names – think Kai, Lane, Cade, and Reid – were gaining. The baby name Dean seemed left behind.

Except, of course, a handful of those 1960s-born Deans made names for themselves.

Beginning in 1993, Dean Cain starred in the smash hit ABC Series Lois & Clark: The New Adventures of Superman. It made Cain a household name, though the baby name Dean continued to slide.

In late 2000, the world went to Stars Hollow, and met a mother-daughter duo in the Gilmore Girls. We also met daughter Rory’s first crush, local boy Dean Forester. He’s played by Jared Padalecki over five seasons, and even cameos in the Netflix reboot. (Spoiler alert: they don’t end up together.)

But neither the real nor the fictional small screen Dean could reverse the name’s course. And the timing fits, of course – a name that peaked circa 1967 should be heading for style limbo thirty-plus years later.

Back to Jared Padalecki, who played Rory’s boyfriend on Gilmore Girls.

In 2005, he was cast as Sam Winchester, demon hunter, on The WB’s Supernatural. Jensen Ackles played Sam’s brother … Dean.

And their dad, John Winchester, was played by Jeffrey Dean Morgan, just to sprinkle one more use of the baby name Dean.

The show was a hit, featuring the brothers facing off against ever more evil creatures, and unraveling disasters of increasing complexity. Oh – and they do it all in a 1967 Impala, for no payment whatsoever. Despite the occasional case of demonic possession, they’re the good guys.

Supernatural has run for an epic fifteen seasons, set to end at the end of 2020. That’s an entire generation of parents growing up hearing Dean as the name of a handsome, self-sacrificing hero.

Incidentally, Castiel – another character from the series – also entered the US Top 1000 as a result of the show.

The numbers bear this out. In 2005, the baby name Dean ranked a chilly #383 – respectable, but clearly stuck in style limbo.

Of course, this generation of parents might also think of Harry Potter’s fellow Gryffindor classmate, Dean Thomas. Or any of the other Deans, from James to Rory’s boyfriend, along the way.

All of this has sparked a mini revival for the baby name Dean, half a century earlier than we might’ve expected it. The result is a rock solid name for a son that feels just the tiniest bit stylish, but also something of a modern traditional.

With steady use for over a century, call it a modern classic. And, as it remains well outside of the current Top 100, it might also be just trend-resistant enough to feel refreshingly different, too.

What do you think of the baby name Dean? Does it feel fresh and new to you, or more like a dad name?