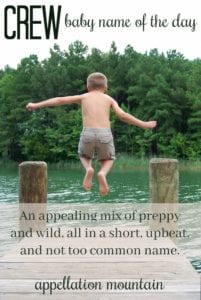 Crew makes for a rugged name with a hint of prep school sensibility.

Thanks to Chantal for suggesting our Baby Name of the Day – and congratulations to the Gaines family of Fixer Upper fame on the arrival of their newest addition, Crew Gaines.

There’s something slightly split personality about this name. It fits with hyper-masculine modern choices, like Ryder and even Rogue. But it also blends in with buttoned-down surname names, like Carter and Easton.

That’s because there are two very different images associated with the word.

But then there’s the very short hair cut, and J. Crew’s sensible-but-stylish basics.

That takes us to the sport. Rowing seems the polar opposite of pirates and such, a refined pastime that brings to mind elite universities and well-heeled regattas.

But rather that detract from its appeal, this name’s dual-nature seems likely to speak to parents after a name that’s not too buttoned-down … but not too disreputable, either. It’s one of the reasons Wilder is white hot right now, and doubtless parents are looking for more candidates that are just on the right side of the line.

The word originally comes from the Latin crescere – to grow. In Old French, a creue meant an increase in military recruits. By the sixteenth century, the word referred to the band of recruits themselves. We can assume that some were orderly; others, not so much.

In New Orleans, you might belong to a krewe. Krewes put on the city’s famous Mardi Gras celebrations, sponsoring floats and parades.

I’d put these groups on the slightly rowdy side of the line. Though, of course, the best-established groups are full-blown civic organizations with serious charitable undertakings. The world-famous Krewe of Rex parades on Mardi Gras itself; the foundation associated with the club recently granted $1 million to New Orleans public schools.

So did Mr. Crew belong to a rowing club? A civic organization? Sail the seas as a pirate.

None of the above. Instead, it comes from an English town, north of London and south of Manchester. The name started out as Cryw in Welsh, or possibly criu. It originally referred to a weir, used in a stream to trap fish, though it can also mean crossing.

Despite the town’s long history, it’s not widely known in the US. I’d guess most American parents think J. Crew first.

The clothing company operated under other names for a few decades, before adopting its current name in 1989. The first retail store opened in Manhattan the same year. The brand joined catalog mainstays like Land’s End and LL Bean.

Up until the 1990s, the name was virtually unknown. Perhaps we should credit to the successful clothing brand for the name’s slow rise? In 1995, six boys were given the name, putting it in the US Social Security Administration data for the very first time.

The name gained slowly, but steadily.

Soap opera star Joshua Morrow, of The Young and the Restless fame, named his son Crew James in 2005. (His other children are sons Cooper and Cash, and daughter Charlie Jo.)

Some of the name’s appeal is down to sound. We’re embracing single-syllable choices for boys like Cole and Chase and Flynn. But I suspect this name succeeds because of that flexible image: a preppy, polished little gentleman, but also undeniably strong, and maybe a little on the wild side. I can imagine Crew jumping off a dock into a Texas lake – and, based on scenes from Fixer Upper, that’s probably literally true for the newest member of the Gaines family.

If you’re after something less out-there than Blaze, but still bold and unexpected, Crew could be the perfect compromise.

What do you think of Crew?