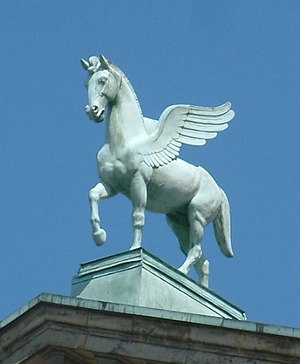 This might be the most unusual name inspiration featured here yet … and that’s saying something!

Thanks to Colleen for suggesting Brietta as our Baby Name of the Day.

Brietta suggests two possibilities: she could be a retro pick, an all-but-forgotten cousin to the vintage Marietta.  Or maybe she’s a nouveau coinage, a spin on all of those Bri- names.

Turns out that neither are exactly right.

Brietta has never charted in the US Top 1000, but every search I’ve done leads to one place: the 2005 direct-to-video flick Barbie and the Magic of Pegasus.  In the animated tale, a pegasus is a breed of winged horses.  The heroine, Princess Annika, is menaced by an evil wizard named Wenlock.  Just when it seems too late, Annika is whisked away to safety by a pegasus called – you guessed it – Brietta.

The winged horse is actually Annika’s older sister, Princess Brietta.  She took her equine form only after refusing the advances of Wenlock.  Annika saves the day, and they all live happily ever after, Brietta back to her tiara-wearing form.  Actress/pop singer Brie Larson recorded a single, “Hope Has Wings,” for the movie.  Could Larson have inspired Brietta’s name?

Perhaps one of the writers found Brietta in a baby name book.  She does sometimes appear listed as a variant of Bridget, but it feels like a stretch.  First, -etta isn’t a traditional Celtic diminutive form.  Bridie, sure.  But -etta is typically Italian.  With Saint Bridget inspiring the name’s spread throughout Europe, variants like Birgitta and Britta can be found in use.

But Brietta?  Not so much.  There are a handful in the US Census records, but not enough to suggest she was ever anything but a rarity.  Brietta has never appeared in the US Top 1000, either.  I turned to Nancy’s list of baby girls names with B in 2009, and there’s no shortage of similar names:

Could Brietta be an elaboration of another name?  One possibility is Abra, a feminine form of Abraham, worn by a Biblical figure, a fourth-century saint, and a character in John Steinbeck’s East of Eden.  Abra could be elaborated as Abrietta, and losing the a gives you Brietta.

Circa 2011, the ending -etta is in fashion limbo, while -ella rules the playground.  But could Scarlet, Juliet, Bridget, and Violet be leading a resurgence of -et, -ette, and eventually -etta names?  I’ve heard Julietta and Violetta praised on baby name boards.  Sarah Jessica Parker‘s daughter is called Loretta.  And choices like Elisabetta sound surprisingly fresh.  Even Etta summons up the legendary Etta James – born Jamesetta Hawkins.

Brietta may not have roots in the past, but she could have a promising future, satisfying parents who want something different, with just a hint of antique charm.  But with so many Bri- names in heavy rotation, it may be too late for Brietta to sound truly novel.