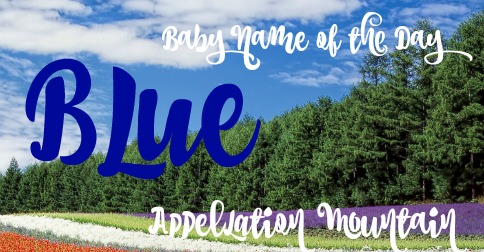 This post was originally published on January 9, 2012 in celebration of Beyonce and Jay-Z’s daughter, Blue Ivy. It was substantially revised and re-posted on November 9, 2015.

Blue Ivy Carter is a pint-sized celebrity, the child of trend-setting style icons.

But has her given name caught on? Our Baby Name of the Day is Blue.

Beyonce gets credit for boosting our awareness of Blue as a baby name, but she and Jay-Z weren’t the first. There’s also:

We see Blue in birth announcements most often as a middle name. Because data on middles isn’t widely available, it’s tough to say if that’s a trend.

Blue: True. And Other Things.

The word dates to around the year 1300. It’s a primary color, but there are plentiful associations, some favorable, others not so much:

From navy to carolina, there are many shades. Because they’re more typically associated with boys, there’s something slightly gender-bending about choosing the name for a girl. 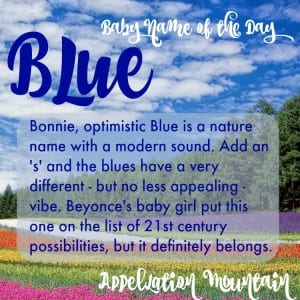 There’s also the dog on Blue Clue’s – another girl, for what it’s worth.

Names like Luke and Ruby, Lucy and Jude are quite stylish today. And short B names for girls – from Brooke to Blair and even Bess – have a certain charm.

Blue fits right in to their company. As colorful as Scarlett, as upbeat as Blythe.

We’ll likely hear more of this name in the years to come – though perhaps mostly as a middle.

What do you think of Blue? Does it seem like a wearable first name to you, or is this one better in the middle?