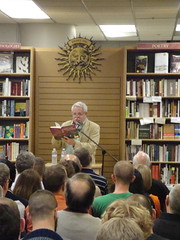 Author Armistead Maupin reading from his works; Image by larrybobsf via Flickr

He’s a literary rarity with a harsh – and yet still romantic – sound.

Thanks to Sarah for suggesting Armistead as our Baby Name of the Day.

Chances are that your first association with Armistead is the writer, Armistead Maupin. Yes, that’s his real name – he’s actually Armistead Maupin, Jr.. Maupin is famous for his series of novels, originally appearing chapter-by-chapter in the San Fransisco Chronicle. The stories were a window into San Fransisco life, incorporating current events and real life figures. The stories were published as books, and then adapted for television. Despite the authenticity of his name, it does sound like a dramatic nom de plum. A BBC documentary was titled “Armistead Maupin Is a Man I Dreamt Up” – an anagram, similar to a device famously used in his fiction, fueling speculation that Armistead could not possibly be his given name.

For me, the second Armistead is far more obscure: the upper-crust boyfriend in the 2003 Amanda Bynes vehicle What A Girl Wants. Bynes played Daphne, an American who heads to London to meet her long-lost father, the aristocratic Henry Dashwood, played by Colin Firth. Armistead is a minor, minor character – the boyfriend of Dashwood’s would-be-stepdaughter, Clarissa. Hijinks and a predictable happy ending follow.

Armistead is a rarity, but his history is pretty clear.

The Greek eremos denotes an uninhabited place, like the desert. It is the source of our word hermit. Hermit and ermit are both valid spellings in Middle English. Hermits existed throughout the Christian world, devoting themselves to solitary prayer. Just as many place names can be traced to a church or monastery, some place names indicate that there were near a hermit’s residence. Despite their solitary lives, hermits did still interact with their neighbors. Ermit sounded like armit; the final syllable is from the Old English stede – place – as in homestead.

A handful of notables have answered to the surname over the years, including a military family. Major George Armistead was the commander at Fort McHenry during the War of 1812. He’s the one who commissioned a huge American flag, big enough to be clearly visible to the British. It inspired Francis Scott Key to pen “The Star-Spangled Banner.” For years, the very same flag greeted visitors to The Smithsonian’s Flag Hall in the National Museum of American History. The flag stayed in the Armistead family for years before George’s grandson, Eben Appleton, arranged the donation.

Other Armisteads surface, like this Virginia lawyer. But this is clearly a name tumbling towards obscurity. It might remind some of La Amistad – a slave ship, and site of an 1839 mutiny and rebellion, chronicled by Stephen Spielberg in a 1997 movie. Or might just be too much name for parents to consider.

But should Armistead be found on your family tree, it might be worth brushing him off. He’s preppy and upper crust, but there’s a great story there. He’d make an arresting middle name, or if you fancy the short form Army, a brash masculine moniker that remains at least as wearable as Gunner.