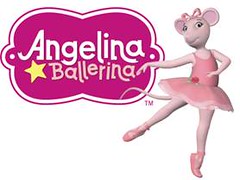 She’s a world-famous actress and a dancing cartoon mouse.

Thanks to Jessica for suggesting Angelina as our Baby Name of the Day.

Angelina has been quite the popular name in recent years.  She fits right in with Isabella and Olivia and a host of elaborate, feminine appellations.  But there’s more to Angelina than her frilly, elaborate sound.

She’s a cousin to Angela, a diminutive form in the key of Paulina and Carina.  Angela comes from the Latin angelus, as in an angel.  Angel translates to “messenger” in the original Greek.

Before our era, the name was worn by princess and Serbian Orthodox saint Angelina of Serbia in the 1400s.  The name has a long history of use in the east, worn by plenty of Byzantine princesses over the years.

The early nineteenth century gives us suffragette and abolitionist Angelina Grimké, a sharp and thoughtful writer and thinker of her age.

But Angelina has been in the spotlight in recent decades for other reasons, her namesakes less weighty:

She’s never left the US Top 1000, and she’s very popular in recent years.  She’s been big in the Ukraine and Armenia, too.

Despite Angelina’s recent slide, she’s still more popular than the original Angela, as well the French Angeline and the Rugrats’ Angelica.

If elaborate feminine appellations are your style, then Angelina could be the ideal choice.  She seems less common that she’s actually been in recent years.  Lina makes for a great short form.  At first glance, she’s a frilly and overly feminine concoction.  But layer on her history, and Angelina is a surprisingly strong choice.