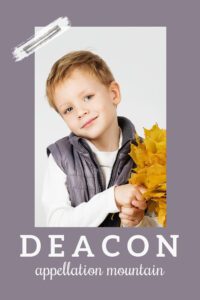 The baby name Deacon combines a solemn calling with a spirited sound.

Thanks to Janelle for suggesting our Baby Name of the Day.

The baby name Deacon started out as a job title. Or, perhaps more accurately, a vocation.

Deacons are generally assistants to clergy, a type of religious official.

The exact role and requirements vary across time and denomination, but the concept of deacons traces its start to the earliest days of Christianity.

The word comes from the Greek diakonos – literally, a servant of the church. That became diaconus in Latin, and eventually deacon in English, with a few other spellings along the way.

It might’ve started out as a surname for a deacon, or possibly for a servant in the household of a deacon.

But just like many surnames, it surfaces as a given name from time to mine.

The baby name Deacon first appears in the US Social Security data in the year 1971, with 15 births.

But while the world knows them both as Deacon, it’s a nickname in both cases.

Jones came to the league in a Cinderella story, nearly overlooked, drafted late the by LA Rams as a defensive end.

He went on to change the game – redefining what the position could do. He coined the term “sacking” the quarterback.

In 1980, during his first year of eligibility, Jones was voted into the NFL Hall of Fame.

Jones’ birth name was David. As he tells the story, so many men shared the name David Jones, so he nicknamed himself Deacon. He liked the contrast between the aggressive sport and the peaceful nature of Deacon.

But Jones also drew on a long history of athletes choosing the nickname. Way back in the 1870s, James “Deacon” White played professional baseball in its early days, a catcher in the era before gloves were introduced.

So we’ve loved the contrast between strong, tough athletes and the contemplative name for ages. But Jones’ career matches up closely with the name’s rise.

In the same era, musician John Moore was given the nickname by a fellow band member. Deacon John fought it at first – would it make him sound like a gospel singer? But it stuck, and he became a New Orleans rhythm and blues legend. Still, he’s never become widely known on the national stage. That means the name’s rise in use is probably more about the athlete.

That matches up with the debut of hit sitcom The King of Queens, starring Kevin James as Doug Heffernan. Doug’s BFF is Deacon Palmer. While Palmer is tall and athletic, it’s his given name – not a nickname earned on the field.

Since then, television has given us more fictional Deacons.

Beginning in the year 2000, Deacon Sharpe appeared on daytime TV’s The Bold and the Beautiful. The character soap opera hopped to The Young and the Restless in 2009, before returning to Bold.

More recently, Nashville’s Deacon Claybourne played a musician and central character in the drama for six seasons, from 2012 to 2018.

The baby name Deacon rose quietly, but steadily, in use thanks to a combination of factors. The football player first, and then the television characters, made it a possibility for some families.

And then Reese Witherspoon and Ryan Phillippe welcomed their second child together, a brother for Ava Elizabeth. Deacon Reese Phillippe was born in 2003.

It wasn’t just about Reese and Ryan, of course.

The baby name Deacon fit for so many reasons.

2014 was near peak-Aiden/Jayden. Parents were looking for more two-syllable, n-ending names to consider.

Word names were beginning to rise. Maverick and River both gained steadily in the same era.

Deacon sat at the intersection of both, a slightly different alternative to favorites like Dylan or Mason.

That’s not much of a tumble – even at its most popular, Deacon never quite caught on.

That makes it vaguely familiar, but not at all trendy – a sweet spot for many parents seeking something different, but not completely unknown.

Overall, handsome Deacon splits the difference between the serious and the spirited. It’s a name that feels almost traditional(ish) and yet somehow unexpected, too.

What do you think of the baby name Deacon? 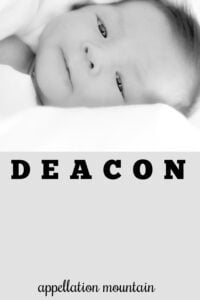