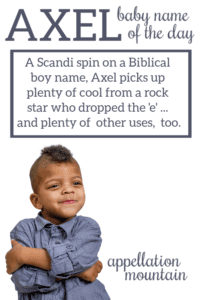 Axel sounds like a spin on the oh-so-popular Alexander, but this name has a very different story.

Thanks to Rebecca for suggesting our Baby Name of the Day.

You might think this name signals Guns N’ Roses fandom gone too far. Not so! Long before William Bruce Rose adopted his stage name and recorded a string of #1 singles, this name had already appeared across the history books.

The Old Testament gave us Absalom, son to King David. The name means my father is peace, but his story didn’t turn out that way.

He was charming and handsome – and trouble, too. Absalom rebelled against his father, raising an army and declaring himself king. Things looked bleak, but David’s troops triumphed in battle, and the beloved son lost his life.

Even if you don’t know the tale, the name that has become a lament, a synonym for a wayward son, thanks to William Faulkner’s Nobel Prize-winning novel Absalom, Absalom! and a host of literary references.

How did we go from literary, Biblical Absalom to ever-so-cool Axel?

Absalom and Absalon are found in Scandinavia by the twelfth century. Absalom became Apsel in Danish, and other forms, like Axelen and Axelin appear, too.  Whisper it down the alley, and eventually the name reaches its current form.

So how about axles?

On a car, they’re the poles that hold the wheels. It shares roots with the word axis – no relation to Absalom at all. It’s a familiar word, and one that lends Axel a sort of gears-and-motors feel.

The name has a long history of use in Scandinavia.

Remember Marie Antoinette, the ill-fated French queen? Then you might think of Axel von Fersen, the Swedish nobleman and military officer turned diplomat. He became her dear friend, and helped the royal family attempt to escape the revolution.

Rumor had it that the queen and von Fersen were more than just friends. Hollywood loves the hint of romance and scandal. Actors have played the part of Fersen in movies from the earliest days to recent years. Jamie Dornan played the part in the 2006 movie, opposite Kirsten Dunst in the towering wig.

In 1864, Jules Verne gave the name to Otto’s nephew in Journey to the Center of the Earth. The 1959 big screen adaptation re-named him Alec, but the novel has been widely read over the years.

Norwegian figure skate Axel Paulsen became the first to execute the notoriously difficult figure skating jump that bears his name, in an international competition way back in 1882.

The name remained obscure, given to just three or four dozen boys a year.

Until Beverly Hills Cop debuted, starring Eddie Murphy at the height of his popularity. First drafted in 1977, the character was called Elly Axel, and hailed from East LA. Multiple re-writes later, it became the 1984 smash hit with a Detroit cop out of place in Los Angeles, named Axel Foley. The name reinforced the Motor City connection. The instrumental title track bears the main character’s name – that became a breakout hit, too.

As of 2018, Axel ranks in the US Top 100. That makes it mainstream. It splits the difference between epic boy names, like Maverick and Legend, and more traditional ones, like Alexander and Jack. There’s an undeniable cool factor, thanks to the letter X, too. And it’s a short, complete name, which appeals to many parents.

A modern, edgy sound combined with deep roots? No wonder this name has caught on in a big way.

What do you think of Axel? Does it strike you as more modern or closer to traditional favorites? 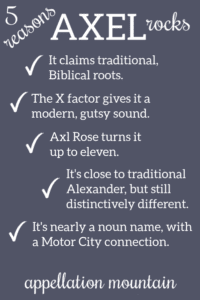