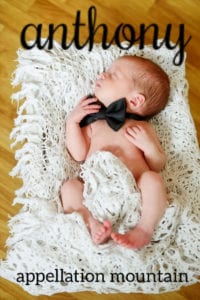 Anthony qualifies as a classic name, one that might even seem just slightly underused today.

Antonius traces its roots back to Ancient Rome and beyond. It’s considered Etruscan in origin, and, like most Etruscan names, the exact meaning is lost to time.

Suggestions abound. Priceless is a popular one.

Marcus Antonius makes the family name famous. He liked to say it connected him to Anton, son of Heracles. (That’s Hercules, demigod and son of Zeus, impossibly strong, known for his many adventures.)

Since plenty of Antonii – descendants of his family – went on to success in war and politics, the legend grew.

Drop the -us, and you’ll arrive at Antony. You might know Marcus Antonius better as Marc Antony, immortalized by Shakespeare.

First performed around 1607, the play was based on an English translation of Plutarch’s Lives of the Noble Greeks and Romans, written in second century AD. It falls somewhere between history and tragedy, with plenty of romance, too.

The Antony spelling was familiar in English for many years.

But let’s step back in time for a minute. Mark Antony lived in the first century BC.

The name must have been in use outside of his immediate family, because by the late 200s/early 300s, we have Saint Antony the Great, the father of Christian monasticism.

Athanasius of Alexandria recorded his story around the year 360. A Latin translation followed, and the saint’s biography would remain widely read through the Middle Ages. It spread the idea of monasticism. Inspired by the gospel, as a young man he gave up his possessions and lived as a hermit.

Strictly speaking, he wasn’t the first to do so. Historical accounts suggest that the practice was not unknown, with others, like Saint Thecla, withdrawing to the outskirts of cities. But Antony took it one step further. He headed into the desert west of Alexandria, and remained there for most of his life years.

It’s said he struggled with all manner of temptation, and wrestled with the devil himself while living in solitude.

Eventually, a group of like-minded ascetics formed around his home. He emerged from his self-imposed isolation to guide the formation of a monastery.

Art and literature depicts the saint often, especially his temptations during his time in the desert. They became especially popular during the Middle Ages. Stories of Saint Antony’s courage became popular.

More saints by the name followed, and it remained in steady use across Europe.

At some point, the spelling changed from Antony to Anthony. That’s because it was associated with anthos, the Greek word for flower.

In English, Anthony is the standard, and has been for centuries. But plenty of other languages omit the h. Think of Antoine in French, Antonio in Italian and Spanish, and all of those Slavic and Scandi Antons.

Besides the ancients and the saints, plenty of men have answered to the name over the years.

That’s not counting artists, politicians, authors, or other notables.

Fictional characters, too, abound. Marvel’s Tony Stark might be the best known of our moment, but he’s far from the only one.

One of the early boosts to the name came from Anthony Adverse, an epic historical drama that started out as a novel in 1933 and became a Oscar-winning 1936 movie.

From 1905 onward, this name has always appeared in the US Top 50. That’s powerfully popular. It briefly reached the US Top Ten in the early 2000s.

Perhaps the rise of names like Zachary buoyed Anthony, too. But maybe not. While there aren’t as many three-syllable, y-ending boy names as there are for girls, choices like Jeremy has history aplenty.

But here’s the switch that all of those numbers hide: for generations, we were rich in Tonys, from Danza to Tiger. Every Anthony used the nickname.

Today, though, it’s the name in full that feels far more appealing. Maybe it’s even a little British, but  mostly I think it’s just a great, longer name for a boy, in keeping with choices like Elijah and Sebastian that are used in full.

That could make this name feel fresh and even surprising – even though it’s undeniably a classic with a long history of use.

As of 2018, the name had fallen to #38. But if you’re a fan of traditional picks and like the sound of the full, three-syllable name, you might be surprised at how little your child has to share this name.

What do you think of Anthony. Do you like it in full, or prefer the nickname Tony? 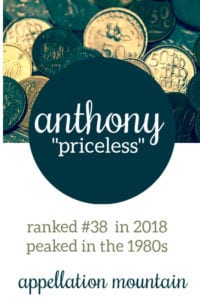