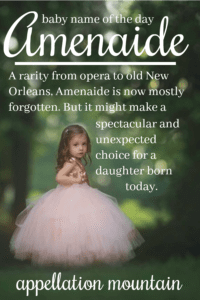 Amenaide comes straight from Lafayette Cemetery #1, a name that exists in an opera and a handful of old New Orleans families – but almost nowhere else.

And yet, our Baby Name of the Day might just substitute for Adelaide and Genevieve.

A great many Germanic names were whispered down the alley into French. Some of them came to England with the Normans, and continued to evolve. Meanwhile, others filtered into general use throughout the Francophone world.

My best guess is that Amenaide is Germanic, and the first part comes from ermen – universal. Ermen is the root of Emma, so dropping the ‘r’ isn’t a stretch, and an E-to-A change, well – that’s even easier to imagine.

As for that –aide, in Adelaide it comes from heid – sort or type. I could find names like Ermenhilde in the Dictionary of Medieval Names from European Sources, as well as Engelheid.

So it’s a guess – but it feels like it tracks.

We need to detour for a minute. Back in the late eleventh and early twelfth centuries, Tancred was a Norman nobleman who went on Crusade, and eventually became Prince of Galilee and Regent of Antioch.

In the sixteenth century, Torquato Tasso penned Jerusalem Delivered. Tasso transformed the historical Tancred into an epic hero. And what does every hero need? A love interest or two, of course. Tasso invented a warrior-maiden called Clorinda and a princess, too. The princess was named Erminia.

Erminia edges closer to Amenaide, especially if you assume that Ermen/Amen are the same element.

Monteverdi borrowed some of Tasso’s story for a 1624 work. So did Voltaire, in 1760. Voltaire appears to be the first to use Amenaide for one of the hero’s love interests.

Then came Rossini, in 1813. The historical figure’s transformation to fiction was complete.

Tancredi is chock full of drama and heartache. There’s war, of course, and Tancredi is a soldier. He’s lost all his lands but he has won the heart of Amenaide, daughter of a noble family.

Except she’s supposed to marry somebody else. (Of course! It’s opera.) Her marriage will solidify a truce and bring peace to their lands. Tancredi feels betrayed, naturally, and there’s a subplot about a letter that fails to find its way to the right hands and causes all sorts of confusion and many horrible outcomes.
As things unravel, the bride-to-be ends up in jail, accused of treason. After a few more twists and turns, the couple realizes they were in love all this time, and both faithful – but a happy ending proves elusive.

I mean, it’s an opera. Singing and dying carry the day.

Rossini is kind of a big deal, and Tancredi is still performed today. And we know that operas were regularly staged in New Orleans by the 1790s, including Rossini. What I can’t quite guess is whether Rossini would have influenced how parents named their children in the late 1800s and early 1900s in Louisiana, because that’s where our story goes next.

I found Amenaide Chaplain’s name on a family mausoleum in Lafayette Cemetery #1. That’s the grand burial site for many of New Orleans’ wealthy families, located in the posh Garden District.

Genealogy sites confirm that the name remained in the family. But it’s not just a quirky family name. A handful of other women were given the name in the late 1800s and early 1900s. Only a handful, though, and all centered in Louisiana.

It appears as a middle, and a compound name with Marie, too.

A New Orleans cafe bore the name at some point.

Could it be a choice known only to families in this most distinctive city? Or would I find it used in France, or elsewhere in the French-speaking world, if only I knew where to look?

I found just one contemporary bearer of the name. One! It’s so rare it fails to appear in US Social Security data at all. It’s missing from French baby name websites, too.

But wait – here it is! In this treasure trove of names from Quebec cemeteries, the name surfaces again. Similar names, like Amenance and Amenise, appear, too.

Names do disappear. Without a saint, a queen, or a towering literary figure, it’s all too easy to lose names in the mists of time.

And yet, they leave behind these tantalizing hints. If once they were names, why not again?

The downside to this particular choice: “amen” might strike some as overtly spiritual – even though I doubt it’s related to amen, which comes from Hebrew. And it might cause pronunciation challenges, though Amelia and Amanda are both pronounced with a short A sound, too.

What do you think of Amenaide? Would you consider it for a daughter?