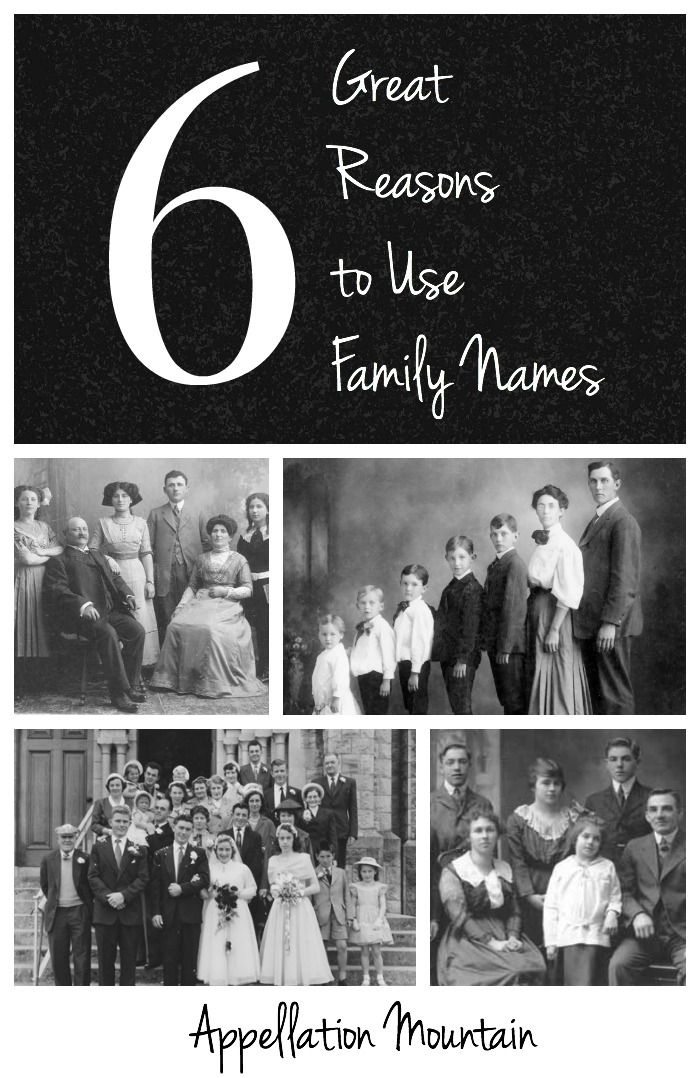 Once upon a time, family names were ever so common.

Every Bill had a Billy. Mothers’ maiden names became firsts or middles. And in some circles, the idea of not naming your firstborn son after grandpa would have been just short of blasphemy.

Those days are over, and for the most part, that’s a good thing. No one should feel pressure to use a name they don’t like, and there are lots of good reasons to forgo family names.

But freedom in naming means that we’re also free to consider family names, whether that means that your Bill has a little Billy, or you take a more creative approach to honoring a loved one.

And there are great reasons to do just that! Here are six of my favorites.

Struggling to narrow down your 23 favorite names to just one or two? Stuck with no names on your short list, because you and your partner can’t agree on anything?

Family names to the rescue.

Even if you have a well-researched family tree stretching back generations, with branches and leaves galore, it’s still a small sample compared to the forest of potential baby names.

When you discard those that feel impossibly dated or just not your style, odds are that you’ll have a short list that is truly, well, short.

Not every family is straight out of Norman Rockwell, but if you have a reasonable relationship with your parents, there’s a good chance that they’re pretty darn excited about the arrival of another grandchild.

And if that grandchild happens to have a family name? In most cases, that’s icing on the cake!

Speaking of grandparents, isn’t it staggering how quickly we forget our family’s history? I always wish I’d asked more questions.

Bestowing a family name on your child is an invitation to learn more about his past. My mother has a family name, one that I handed down to my daughter. I love telling her about the way she’s connected, not just to her grandmother, but to her great-great-grandmother, too.

Look far enough into your family history, and there are almost always some gems waiting to be discovered.

Yes, there will be some inventions and oddities, too. A few names won’t feel quite right for today. But hidden among the family surnames and nicknames and given names will be at least a few usable ideas.

Discovering those names? For many people, it’s a thrill.

A few years ago, an acquaintance introduced me to her daughter. The baby’s name was clunky, not quite cool yet. (And my acquaintance was unaware of my name obsession.) “It’s a family name,” she added.

Adding that bit about it being a family name was pretty darn genius.

It’s much more difficult to be rude about a family name. You’d almost be insulting Great-Grandma Beulah or Uncle Reynaldo. Not that anyone should be rude about any name, ever.

But the word family? It’s like the Get Out of Jail Free card in Monopoly.

We’ve all heard the stats. Some staggering percentage of parents regret the names they gave their children.

While I have my doubts about those surveys, I do suspect that regret is less common when parents willingly use family names.

Emphasis on willingly. If I’d been guilted into naming my son after my father-in-law, well … that would not be good. Happily, my father-in-law is one of the good ones, and I love seeing how much he and his grandson enjoy sharing a name. It makes the fact that we used a wildly common name far more bearable. Regret? Not an ounce.

Because if your child’s name becomes the new #1 choice in the US, it’s still incredibly special. Lots of other kids might share the name, but none of them have your story.

Would you use family names? Why or why not?