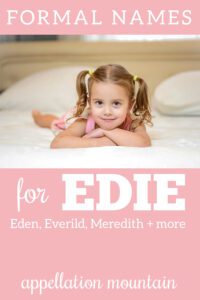 Formal names for Edie range from the traditional to the obscure.

But no matter how familiar – or rare – they offer an appealing nickname, combined with a more formal first. That’s a winning combination for lots of families.

Edie is casual-cool. It’s a logical successor to Sadie and Millie and Daisy. And yet, it’s rich with backstory, too. Even maybe a little bit of an edge.

You might also think of Edie Bouvier Beale – both of them! The name was shared by a mother-daughter pair, aunt and cousin to the late Jacqueline Kennedy Onassis. They’re best known for their later years, living in the crumbling Hamptons mansion known as Grey Gardens, the subject of more than one book and movie.

Or maybe your first thought is Edie Brickell and the New Bohemians. They scored a major hit with upbeat anthem “What I Am” in 1988.

END_OF_DOCUMENT_TOKEN_TO_BE_REPLACED 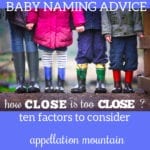 When we decided to call our daughter Clio, we forever closed the door on another favorite name – Theodore, nickname Theo. Or did we? For every family that decides Maya and Milo are too similar, another embraces the sound-alike names. Or insists that Alicia and Alina are totally different names. Some parents might never notice […]

END_OF_DOCUMENT_TOKEN_TO_BE_REPLACED 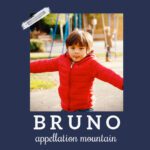 The baby name Bruno melds a tough guy sensibility with a surprising amount of polish. Thanks to Lola for suggesting our Baby Name of the Day TRADITIONAL with an EDGE Looking for a name that’s rich with history but still feels edgy and cool? Here’s one that fits the bill. The baby name Bruno simply […]

END_OF_DOCUMENT_TOKEN_TO_BE_REPLACED 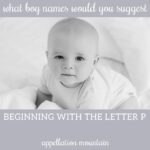 Name Help is a series at Appellation Mountain. Every week, one reader’s name questions will be discussed. We’re relying on thoughtful comments from the community to help expectant parents narrow down their name decisions. Thank you in advance for sharing your insight! Carrie writes: Our son is due in the beginning of March! We’re really […]

END_OF_DOCUMENT_TOKEN_TO_BE_REPLACED 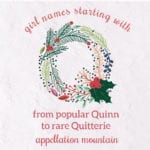 Girl names starting with Q make for a select and quirky list. There aren’t many to choose from. It ranks twenty-fifth of the twenty-six letters of the alphabet. Only U offers fewer choices for our daughters. Still, one of them makes the Top 100. And a second manages to make the Top 1000, too. The […]

END_OF_DOCUMENT_TOKEN_TO_BE_REPLACED 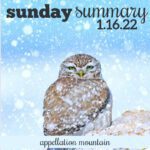 It’s freezing here! I know, I know. It’s winter. It’s supposed to be cold. But it’s enough to make me huddle inside and read. I’m tearing through so. many. books. And, of course, lots of interesting articles about all things name-related. ELSEWHERE ONLINE: The most popular names of the last century are changing. Maybe that […]

END_OF_DOCUMENT_TOKEN_TO_BE_REPLACED 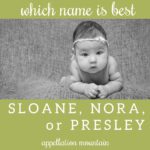 Name Help is a series at Appellation Mountain. Every week, one reader’s name questions will be discussed. We’re relying on thoughtful comments from the community to help expectant parents narrow down their name decisions. Thank you in advance for sharing your insight! Melanie writes: My first and only child will be here around Valentine’s Day. […]

END_OF_DOCUMENT_TOKEN_TO_BE_REPLACED 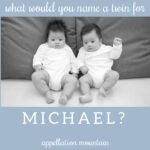 Name Help is a series at Appellation Mountain. Every week, one reader’s name questions will be discussed. We’re relying on thoughtful comments from the community to help expectant parents narrow down their name decisions. Thank you in advance for sharing your insight! Megan writes: My husband and I are hoping you can help us decide […]

END_OF_DOCUMENT_TOKEN_TO_BE_REPLACED 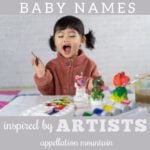 Artist baby names combine so many appealing qualities. Taking inspiration from a favorite artist adds meaning to a name choice. They feel original and creative, and their sounds? Undeniably on-trend. Most of the artist baby names on this list come from painters. Layer in photographers, architects, and creatives from similar fields, and the list is nearly endless. […]

END_OF_DOCUMENT_TOKEN_TO_BE_REPLACED 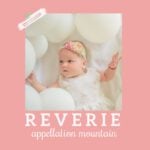 The baby name Reverie pairs a poetic, romantic meaning with pure twenty-first century style. Thanks to Jenny for suggesting our Baby Name of the Day. FROLIC If you’re a 90s kid, “rave” conjures up a certain kind of party. It turns out that reverie and rave share roots. They both come from an Old French […]